Send the Beloved Child on a Journey : To each his own umbrella.

The above is a Japanese quote that highlights letting a child develop independence and self-reliance than letting it grow up in a sheltered environment. If you’ve watched videos of kids in Japan going to school and back home by themselves, walking with some friends or taking the trains from a fairly long distance, that’s the literal meaning to this quote.

Japanese children are taught from an early age to walk out by themselves along with being careful when out in the streets, to respect surroundings, be respectful of people they meet out in the streets and in school. They also take turns serving food to their classmates and clean up after eating, and then clean up classrooms before going home. The latter we did too from grade school up until we were in high school in the Philippines.

The Japanese have even developed a wearable wristwatch-like device that can track kids and let the parents know of their location (we use Life360 until now). That’s teaching them independence but also keeping them safe. Send the Beloved Child on a Journey : Daughter finished Animation and Media studies (with some friends)

To the other meaning of the proverb, it’s probably to “let children do the things they can and want to achieve or simply to have a wonderful adventure in life.” To illustrate, our daughter has graduated from her chosen course, Animation and Media studies. And we’re truly proud, seeing through the years how she has dedicated time and effort in her craft. All the experiences leading up to this is her so-called adventure and hopefully, she will look back to each with fondness.

In the bible, Psalm 127:4 says “Like arrows in the hand of a mighty man, so are the sons of youth.”​ As parents, we can only guide our kids for a short time – as an archer would let go of the arrows to which kids are likened to. Knowing that arrows will not hit targets by chance, loving parents realize that child-rearing should be taken not only with caution and planning, but also with care and fun.

As I look back, there were little and somewhat bigger things the kids and I did for them to learn life lessons, pinpoint what they like and don’t like, what they want to do, and what they can actually achieve. Here’s some of those things, and we hope you’d be able to have the courage  to send your own kids to: 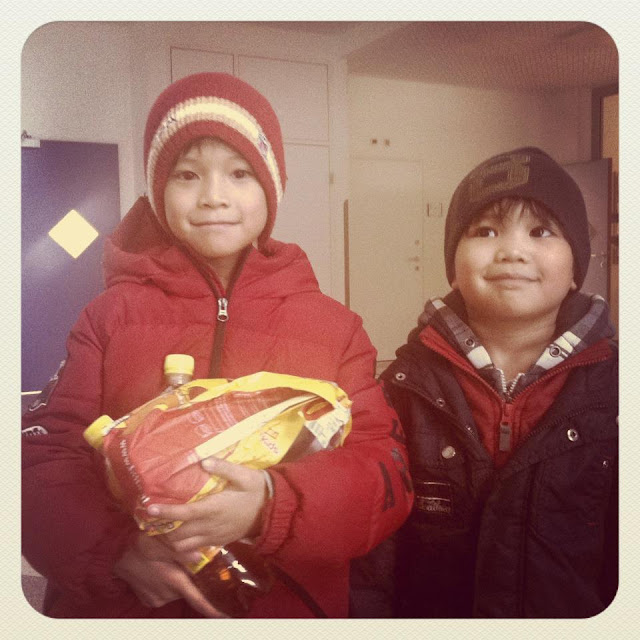 Send the Beloved Child on a Journey : bought snacks

The very first time I allowed the kids to buy bread was when our daughter was almost seven and our older son was almost five. This was, I think, after watching a Japanese show of the same aged kids buying stuff from the grocery store.

The bakery is a few steps away from our building (some floors down) and I can see them anyway from the hallway window on our floor. ^_^ There’s a few minutes were they weren’t visible as the door is on the store’s side. That instance, I waited until they reappeared before getting back inside the flat. I saw our daughter holding her brother’s hand the whole time. Yes, they were able to buy everything on the list I sent.

Later on, they would be able to buy bread and butter from the bakery or what I have on a list. If the money lacked, they would bring it later to the cashier (who were nice enough to allow them to take items home). They would also bring trash down to the collection area and sort them out there.

The photo above was the first time the boys bought snacks by themselves. They went to a grocery store that’s about a 5-minute walk from the school. I waited for dawty to finish her classes and for them to come back. Send the Beloved Child on a Journey : Vacuum cleaning

“All I Really Need To Know I Learned in Kindergarten,” says Robert Fulghum. This is true to some extent. As I have often observed when at the kindergarten, the kids clean up dishes, tidy the table, put back colors and other art materials in appropriate containers, put slippers back where they should among other tasks. They also know how to cut vegetables and peel fruits using safe knives.

At home, it may be different but they can also do the things done in kindergarten if you give them those chores.

I had a list of age-appropriate chores hanged on the door that the kids can do, but in the long run, it stuck with them to do a particular task regularly.

Daughter would rinse and put the dishes in the dishwasher, while son #1 would remove them and place them in the cupboards when done and dried, son #2 would only place knives, forks, and spoons back.

Son #1 is tasked to vacuum but son #2 (as pictured) can also do this if he sees there’s a need to and if son #1 isn’t home yet. Son #2 wipes up the kitchen cabinets to prevent dirt build up. When we got cats, daughter and son #2 alternately clean the litter boxes.

Now that they are bigger, hanging clothes to dry (daughter), folding (son #2), and ironing (son #1) are also on the chore list.

Have Their Own Hobbies

As artists and art enthusiasts, hubby and I experienced how art benefits people, we have tried to encourage the kids to be creative and to dab into whichever form : visual (drawing, photography), performing (music, theater, dance), literary, and culinary (cooking/baking).

We did many things to allow them to find what they like : play indoor and outdoor games, buy books of their choice, watch live football and basketball games, learn piano, violin, tennis, go biking, bowling, wall climbing; attend concerts and cosplay events and buy merchandise – sometimes dressed and sometimes just to observe.

That each child is different becomes obvious to parents as soon as the second baby is born, and again when the third one arrives. As they grow older, they develop their own personality, distinct from the other but also intertwining. Surely, one will influence the other but would have different preferences between other things.

There’s nothing more that I want but for one of our kids to pick up the pen and write (or as a modern way to it : type and share their thoughts out). They think it’s boring… I do feel sad, that despite me often bringing them to bookstores, and making them read books that interests them – they think writing is boring. 🙁

While we love Japanese stuff,  son #2 hasn’t really tried cosplaying while the two did, he comes along for the merchandise though. He enjoys finishing the many different rubik’s cube and such mind games, and also building miniature toys – which perhaps the other four of us doesn’t have patience for. Send the Beloved Child on a Journey : at a running sushi restaurant

Our daughter likes to try new food that she would look for recipes to make or bake them. She now has found her own way in the kitchen and she actually makes better leche flan than I do. ^_^

When time allows, I bring the kids individually to dine out. As their preferences in food also differs, we get to enjoy food more as we try what each other likes and recommends.

Aside from hopping around the city to look for the best cuisine or try the new restaurant, we also buy and try food from specialty grocery stores.

Do What Makes Them Tick

All work (in this case, school study) and no play makes Jack a dull boy, goes the cliché. While studying is a priority, we gave the kids freedom to play when at home. We know the important of school study but we also know that there are many ways to learn outside of the classroom.

Being happy is subjective, but when we say ‘be happy’ it’s to have joy no matter what the circumstance is. Proverbs 17:22 says, “A joyful heart is good medicine...” While there would come sad moments, one can look at the situation as something that will soon pass and looking at better days to come is better than thinking of sad things. How do you make kids see this kind of concept?

A happy child also has happy people around. You are your child’s best example, a joyful disposition is an effective shield from negativity. So develop joy in yourself along with kindness and throw them like confetti especially when your kids are around. ^_^

Proverbs 22:6  says “Train a boy in the way he should go. Even when he grows old he will not depart from it.” Knowing and being in the truth is a much bigger and powerful shield than just having joy. When guided by bible principles, a person has a lesser chance of making decisions that he or she will regret later. It’s not an easy feat as it takes years to learn the bible, but starting early in life means knowing the True God earlier too.

As already mentioned above, you are your child’s best example. If you practice what you learn from the bible, they will see and follow. Deuteronomy 6:6-7 reminds parents that God’s words must be on their hearts, and must be inculcated in their offsprings. Simply put, speak about God when there’s a chance. Even looking at a flower, a bee, or gazing at clouds, all are prospects for discussion.  Seeing beauty around them, kids would understand that there is someone who made such things beautiful, like a painting has an artist who took time to make such a masterpiece, so is there a Creator behind what they see and appreciate. Send the Beloved Child on a Journey : meeting international brothers and sisters