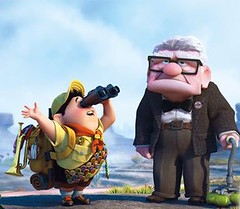 This a repost of my write-up of the movie two years ago. Since today is “the Grannies” theme I thought of posting Charlie and the Chocolate Factory. The husband who’s doing his usual photoshop drawings suggested UP and that makes it easier for me.

There aren’t so many films that made me cry, I can remember a handful and as examples…from Toy Story 2 (Pixar) when Jesse told her story of being abandoned by her ‘owner’ and from Meet the Robinson’s (Walt Disney Animation); I cried much at the end of the story that when Lewis was finally adopted and the ending song Little Wonders was played. I thought it would be the last film that I would cry watching until I saw UP. A few minutes into the film and my tears welled up.

When you meet Carl Fredricksen at first (voiced by Edward Asner), you might think he is not the ideal film protagonist at all. But as I learn more about Carl, a 78-year-old retired balloon salesman when his story was shown, my views changed. He and his childhood sweetheart Ellie (voiced by Director’s daughter Elie Docter) were explorer wannabes. As kids, they had dreamed of one day going to Paradise Falls, deep in the mysterious South American jungles. They grew up, got married and were saving up for that particular trip but problems arise; home issues, childlessness, car repairs and all that kept them busy and ate up what the two saved up…they never made it to Paradise Falls. Carl almost forgot about their dream. When he finally remembered, Ellie was not too fit to go and eventually died without realizing their explorer adventures. My crying at this part did not surprise hubby and the kids.

Later on in the story, Carl meets Russel (voiced by Jordan Nagai), a cute Wilderness Explorer who wanted to earn his “senior assistance” badge and to whom Carl became both a father and a grandfather to.

This movie is a must see. There were lots of instances when the grumply-old-Carl’s antics would make him look more of an action star than an old balloon seller who is in retirement. The whole cast ensemble namely Russell; Kevin, the flightless birdswho turned out to be female; even Charles Muntz, who was Carl and Ellie’s inspiration; and of course the talking dogs, added much for our “ohhhh’s” and guffaws.

Needless to say, the production design is as gorgeous as it should be like its predecessors Wall-E, Finding Nemo and Toy Story. What I like about the film though are the silent passages which shows that indeed, action speaks louder than words…and again what makes each Pixar movies apart from others… that of the humanity within the characters unfolding as the story is told and the ability to touch the heart of the viewers.

Michael Giacchino’s Married Life is the perfect accompaniment for this part of the film. Get a tissue ready, still makes me cry even if I’ve watched it a lot of times already.