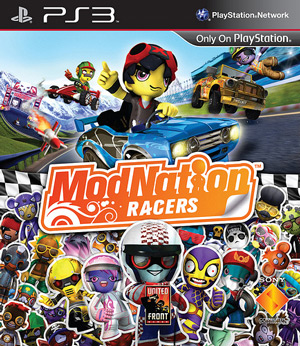 Following Little Big Planet is another game where users can generate content sharing and level creation tools online. ModNation Racers is a kart racing game where players are able to drift and accelerate…much like earlier games as Mario Kart, Chocobo Racing, Sonic Drift and the likes. Players can sideswipe other racers, boost their speed or enable shields to protect them from other racers’ attacks. Much violent I say, players can collect weapons and upgrade them as the game progresses. That’s why this game is mostly played by hubby.

Just like Little Big Planet, there’s a lobby where players can meet, create characters and download stuff, it’s named ModSpot in the game. The Modspot is an all-in-one station for all information a player needs.

Here are two of the modified characters that he made. The character starts out as an all-white figure —– much different than a Sackboy but just the same you can put on skins, hair, colorize it and modify it the way you would, perhaps like your favorite cartoon character or superhero.