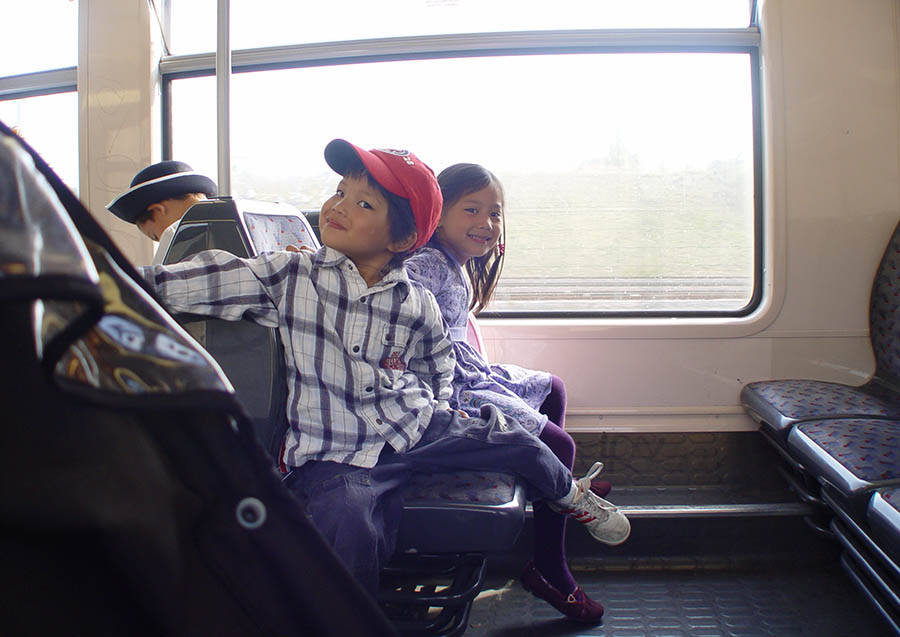 Truth be told, we wanted to bring the kids to Disneyland Paris for the summer. But hesitation moved it a little later into a colder month. That’s ok though, we still got some Parisian sun.

We were staying in Marne La Vallee, where Disneyland is located since it was the main attraction/reason we went to vacation for. It’s about a 30-minute car ride going to Paris, but we decided to take the train instead of renting a car, thinking it would still be a convenient trip. (Ooops, the trains have stairs, and not all stations have elevators – which isn’t so easy when you have a baby stroller).

Aside from this, the ride is smooth and we even met a friendly, older French lady who talked to the kids during the ride. Also, kids under 4 years can travel free of charge on all public transportation in Paris.

So what do you do in Paris but to see the famous and historical structures and establishments first? Here are some. (Note: we only did about 9 hours in Paris but 3 days in Disneyland, so this is a very limited write-up). 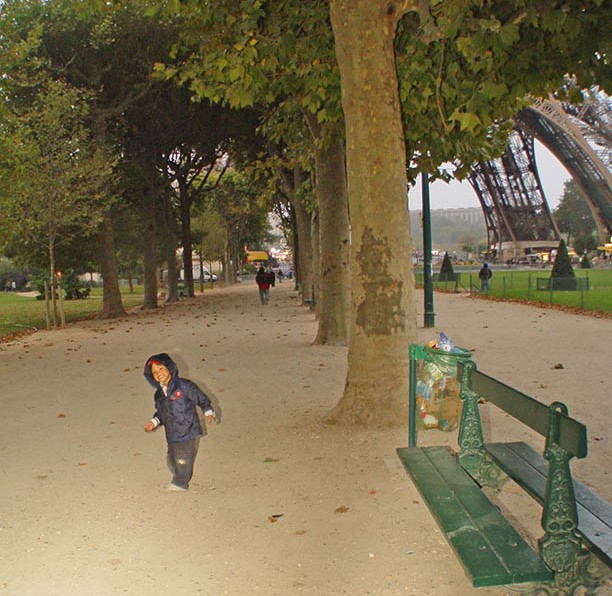 Paris With Kids : walking under the Eiffel tower

We do not have a lot of photos but we tried to take as much as we can, I apologize for the quality of the photos we got. To save time, we went to the ones that are easily accessible from the other.

One of the more famous monuments in Paris is the Arc de Triomphe de l’Étoile (‘Triumphal Arch of the Star’), established to honour those who died in the wars. It’s worth visiting to learn of French history. The monument itself took 30 years to build (give-take), as it is grand and being 50m in height, there were problems faced in its construction.

It is also by the Seine River, so you could walk around and enjoy the view.

We wanted to visit the Notre-Dame for its architecture and history, not as patrons of the religion the cathedral belongs in. The structure is really old, construction started in 1163! Still stands today and is more than 800 years old…while we appreciate the gothic design it was built in, it’s probably not as interesting for the kids.

There’s a garden adjacent to the Seine river, so you could linger a while to relax and just be and have the kids run around for a bit.

No Paris visit is complete without seeing Gustave Eiffel’s tower. We added ourselves to the millions of people visiting it every year. It was starting to rain when we arrived, so we hurriedly walked a bit, took photos, but didn’t really get to go up. We hope next time we would, and see the view from atop, have dinner while there too. 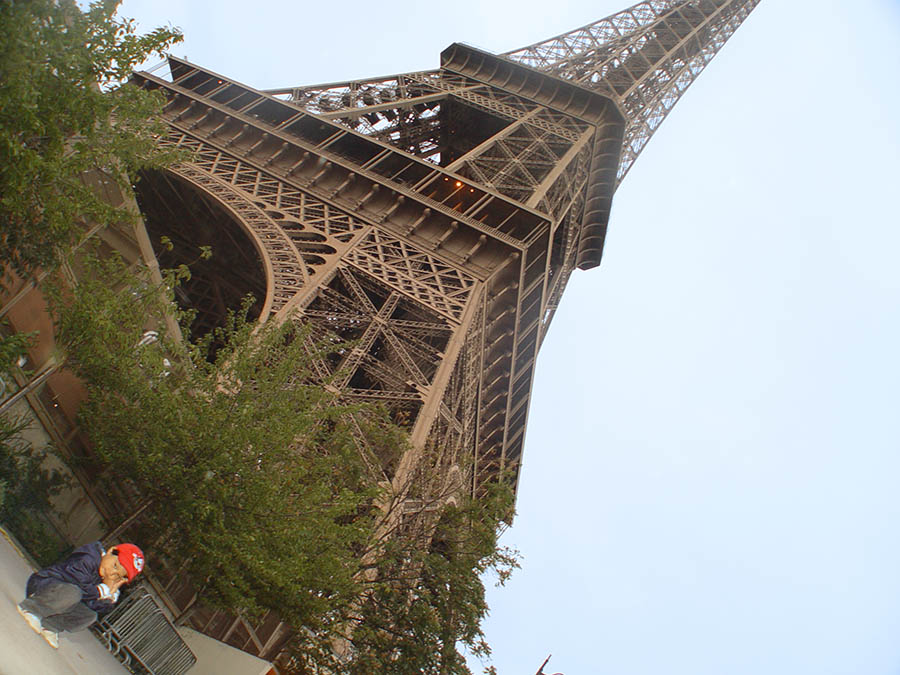 Paris With Kids – Posing by the Eiffel Tower

Aside from being a Techie dad, hubby is an artist by profession. Even during those years that he wasn’t working in the advertising field, he never stopped creating, illustrating, and doing things he loves – art. A visit to the Louvre is both on our to-do list, me at least for appreciating art and writing about it back in the days. 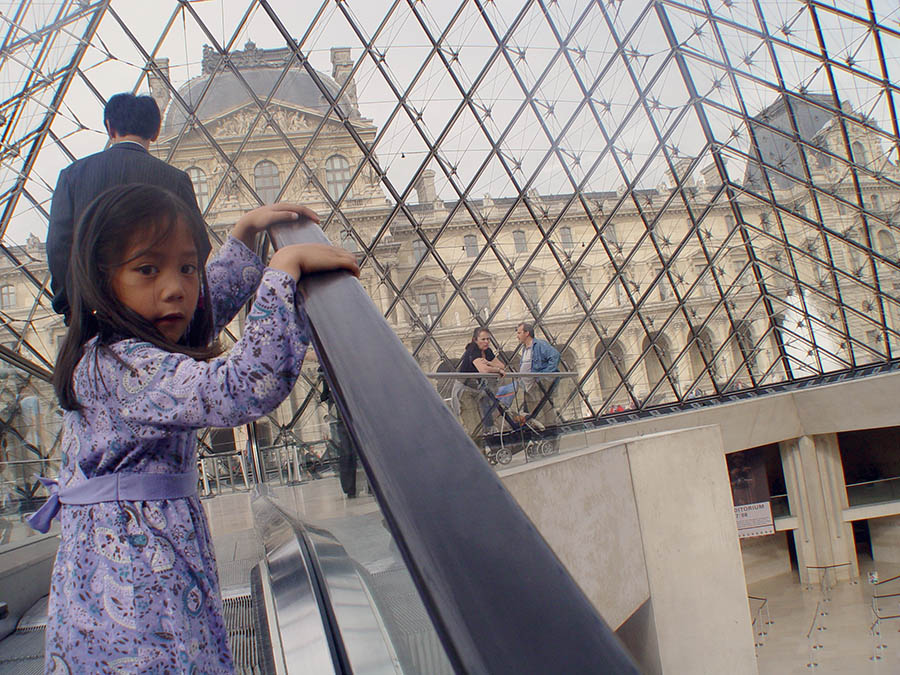 Paris With Kids – Inside the Louvre Pyramid

The Louvre deserves a lot of hours for one to enjoy it fully. It’s the second largest museum in the world, so it really has a lot in its collection of paintings, sculptures, drawings, archeological artifacts, and more for history buffs. It’s free for under 18, so do bring your kids as often as you can! (Plane ticket not considered.)

We had the rare chance of getting close to the Mona Lisa, yeah…I don’t fully understand why, but the lady guarding the rope told us to go as she held it up…so we did, and thankfully we weren’t escorted out. ^_^ Although the daughter looked unhappy in this pic lol, I think  she doesn’t know the fame that comes with the Mona Lisa yet. 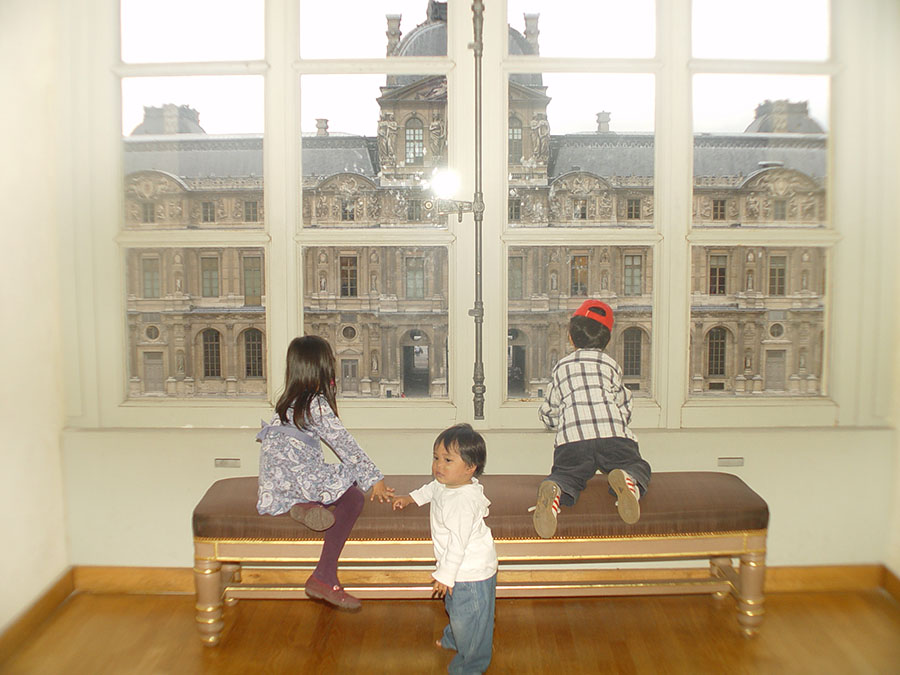 Paris With Kids – Inside looking out

What To Pack For Paris with Kids

As with other cities you visit, check the weather to be able to pack properly. Bring a windbreaker if you are flying in September to October in Europe, it gets cold and might rain a little. For the colder months, bring down jackets. Wear comfortable shoes – make sure that the kids won’t get blisters from too much walking, bring extra socks and shirts too. Pack some water and snacks so you save both time and money from buying in the grocers or stores.

As mentioned, Disneyland was the main reason that we flew to France. As it is located in Marne La Vallee, we stayed at My Travel Explorer’s Hotel, a hotel nearby instead of in Paris. The shuttle bus takes us about 10-15 minutes from the hotel to the theme park. 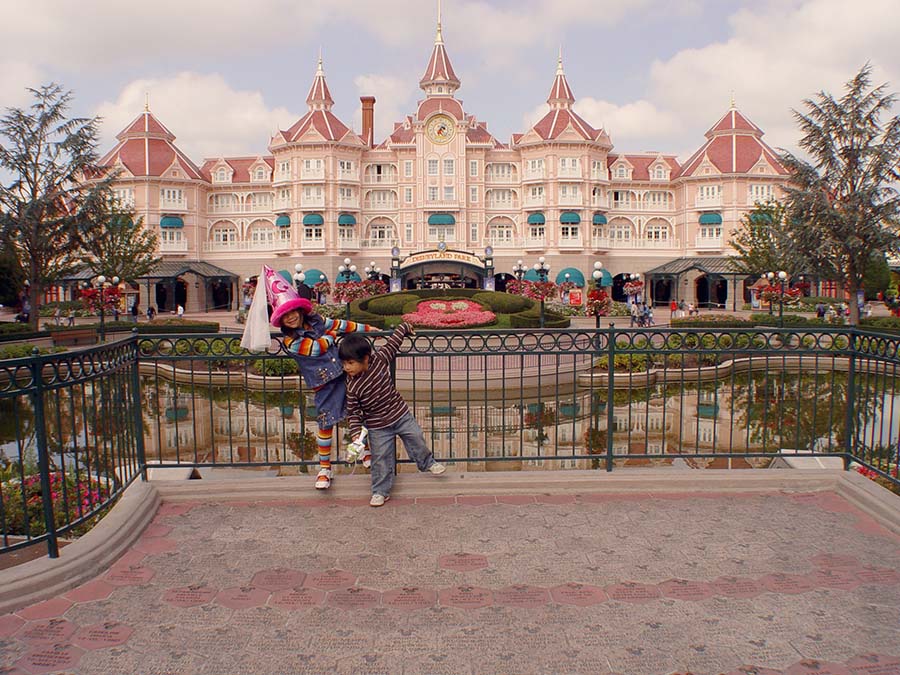 Disneyland Paris has two theme parks, Disneyland Park that opened in 1992 and Walt Disney Studios Park which opened in 2002. And there’s the Disney Village which is mostly a shopping and dining area, sans entrance fees.

Disneyland Park is home to all the fairy tales and Disney characters we know. Its castle is that of Le Château de la Belle au Bois Dormant (Sleeping Beauty Castle),  one which is actually a replica of the castle in Disney’s 1959 movie Sleeping Beauty. There are a lot of rides, you should really pick out what you like to try because the lines could be long.

There are 5 main lands to enjoy:

Walt Disney Studios  Park showcases the show business side of Disney, themed after movies, production, and behind-the-scenes. Here, you can get your photos taken with life-size mascots, have their autographs (bring a pen and paper), and also enjoy other awesome rides.

There’s no shortage of food for a hungry child in Disneyland Paris, there are close to 50 restaurants that cater to various palates. There would be snacks, dessert parlors, all-you-can eat buffets, and to-go nibblers and treats from kiosks and food joints. Be it American, Italian, French, Tex-Mex, English, and German cuisines, you’d find what you like. There would be quick service to fine dining, even preferences of vegetarian too. You can see all the Disneyland restaurants here, so you can plan your meals. We recommended a themed one to make the experience unforgettable.

Disneyland is supposed to be the happiest place on Earth but I got the biggest scare of my life while we were there. And I bet so did hubby and our daughter. She got left behind on our way out of the big ship…we’ve already walked some minutes when we noticed that she wasn’t around. 😭😭😭😭😭

We went back to the entrance of the big ship and we saw her crying, all the more when there were other people around her, talking and asking her in French. Good thing, she knew never to walk away when such happens. She knows that I/we will come back and look for her, as this is how I trained them every time we went out of the house. If one gets left at a train station, what we agreed is to stay put – because I/we will surely come back. Assuring the kids that you will return for them makes them confident enough to not panic.

Lesson learned, as parents…don’t walk too fast when in a theme park. They could get distracted with all the things they see. Brief your kids on what to do if they get left behind. Another thing, you can include your contact card in their bag or wallet, and instruct them to show it to people who think they would care, especially the police, in case they get lost or left behind. They say that it might be too early to visit Disneyland for kids younger than 3, and I somehow agree. That’s why we hope to get back when the kids are a little older. We’d definitely see and do more in Paris with kids in tow the next time. We’d explore the museums and gardens and stay longer and go around the Louvre to see everything.

Aside from the photos, we took home a lot of souvenir items from Disneyland, from a princess dress to a Mickey Mouse hat, a Buzz Lightyear lighting toy to Disney print shirts, and even Disney-Paris tees. There might not be a lot for them to remember but the photos and mementos will surely remind them, even this moment when Sulley proved that he is the Top Kids Scarer. 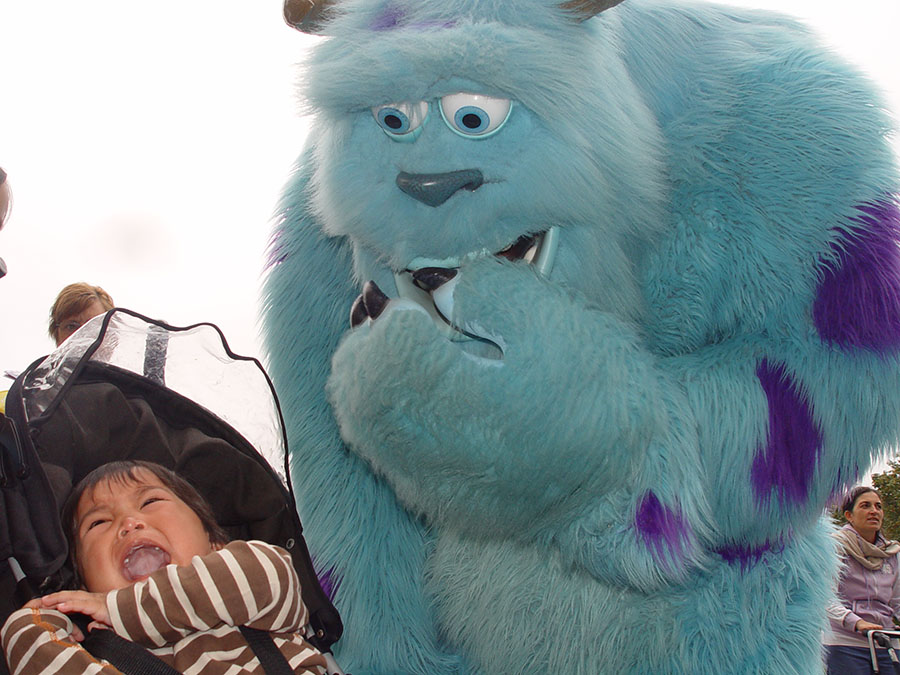 Disneyland and Paris With Kids: Disney Studios – Sulley scaring a kid (our youngest) 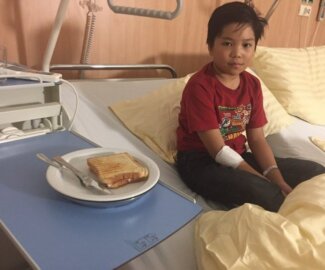 Exploring Venice With Kids : Best Things To See and Do Baking Brownies and Cupcakes with the Kids 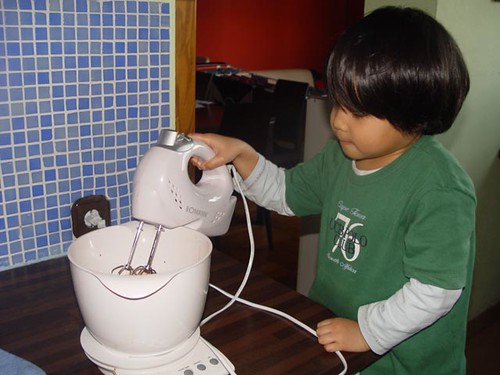