Every KitKat we’ve ever tried from around the world.
This post gets updated to the date we try a new one. ^_^

We love Kitkat, as  many other Japanese food and stuff. When there’s a new Kitkat variety that we see, we try them no matter where they’re manufactured. Most of the time though, friends gift us knowing how much we love both Kitkat and Matcha. (Thanks guys!) 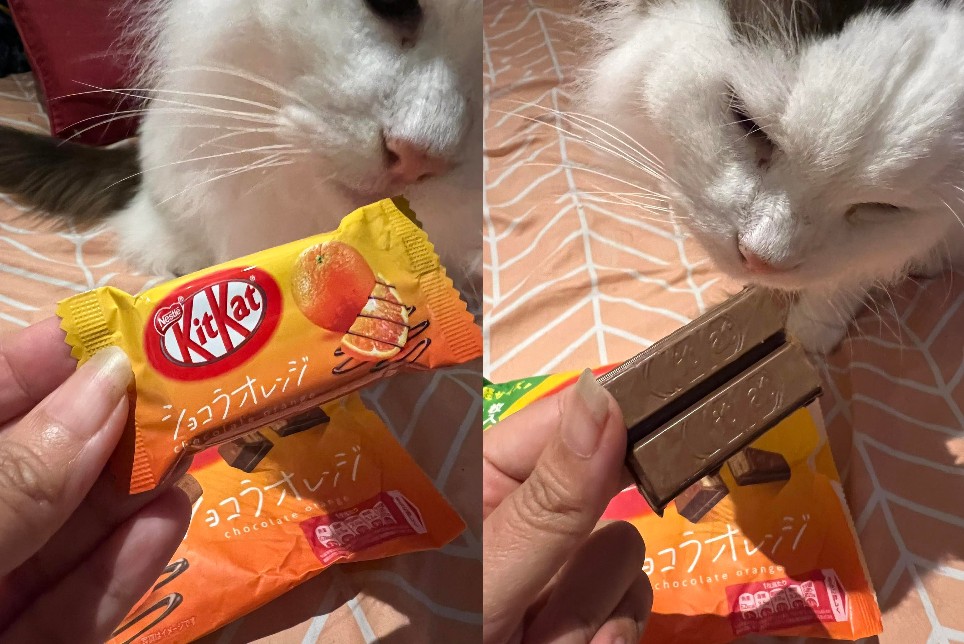 While we don’t really like chocolate and fruit combination so much, this chocolate orange is good and refreshing. Not too sweet, just a tinge sour but mom says she is ok with just half of the two bars. Our curious cat Leon heard the sound of plastic that’s why he’s in the frame. He wanted to get the wrapper, not really the choco (we know chocolate -and orange- are poisonous to them, so be assured that he didn’t try to taste any. 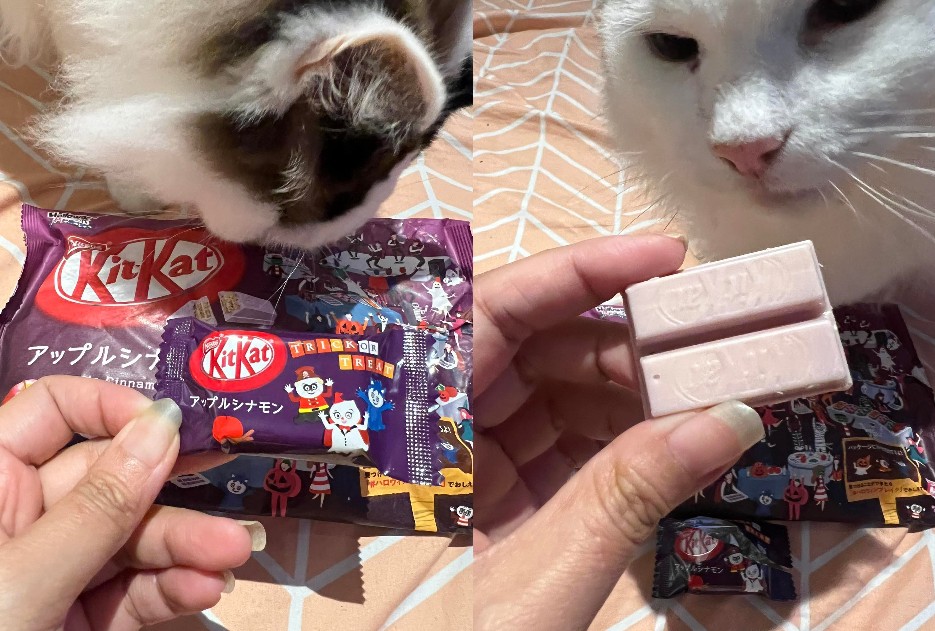 Apple cinnamon reminds us of Apfelstrüdel, our favourite Austrian dessert. This however, has a different taste but you know it’s still apple and cinnamon and is also pleasant to the palate. Smelled of candles a bit, yes…as this combination is what mom uses at home in the winter. ^_^ 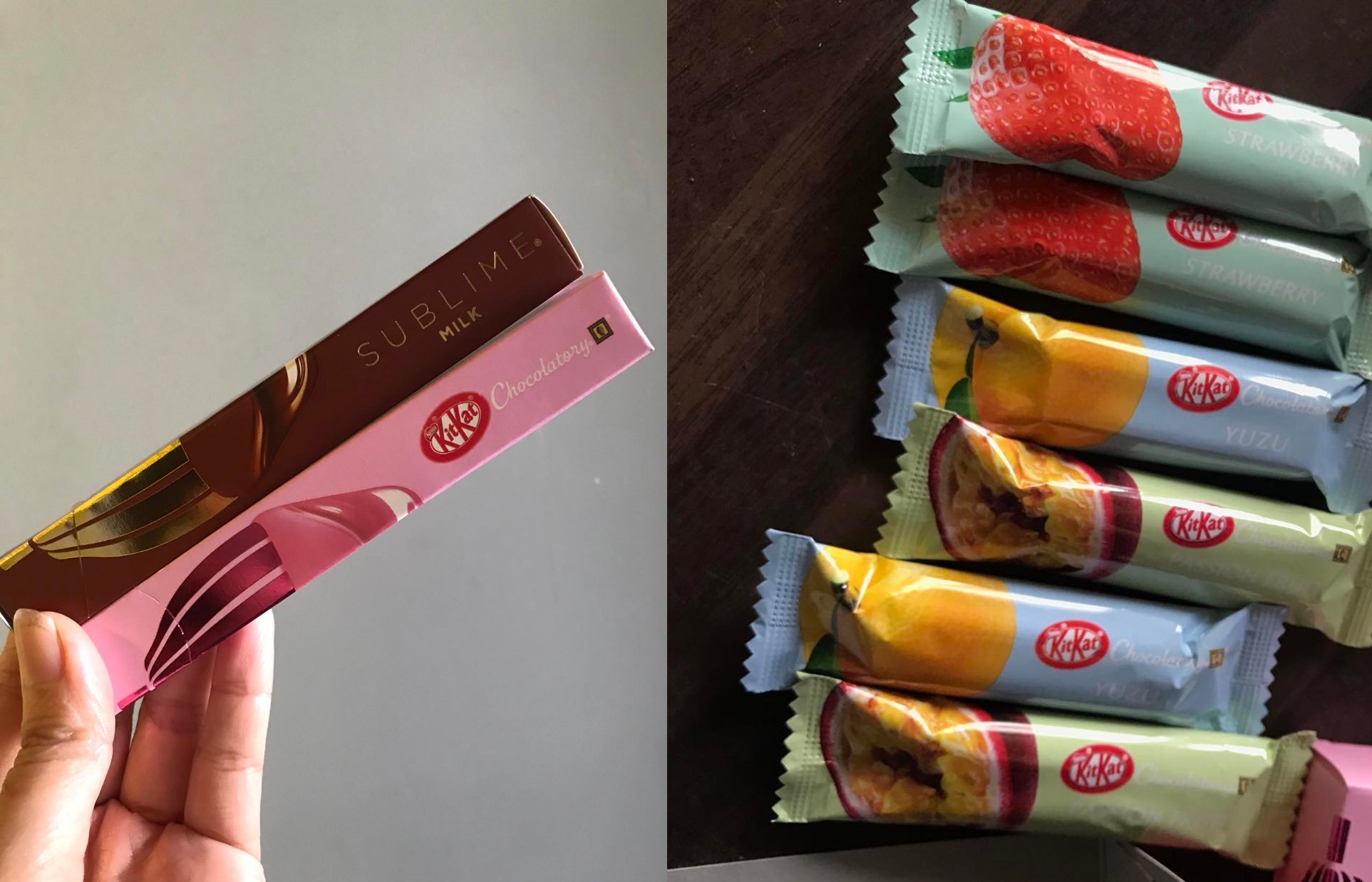 These Kitkat Chocolatory Sublime Milk and Ruby were sent by my daughter’s Japanese friend along with other artistic stuff. These are included in the Takagi Yasumasa premium handcrafted Kitkats. Yasumasa is the owner and chef of LE PATISSIER TAKAGI and they create luxurious line of chocolates for the Kitkat Chocolatory.

The single packs were Kitkat Chocolatory Sublime I ♡ Fruits  in Yuzu (citrus), Passion Fruit, and Strawberry. And of course we expected the citrus and passion fruits to be sour, the strawberry is alright. 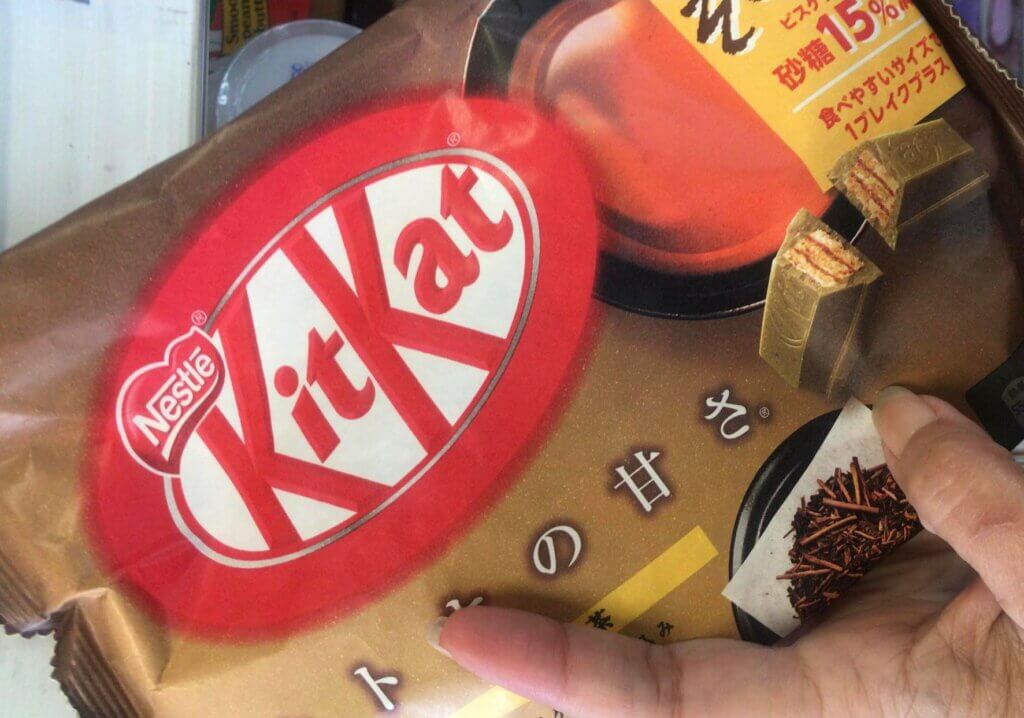 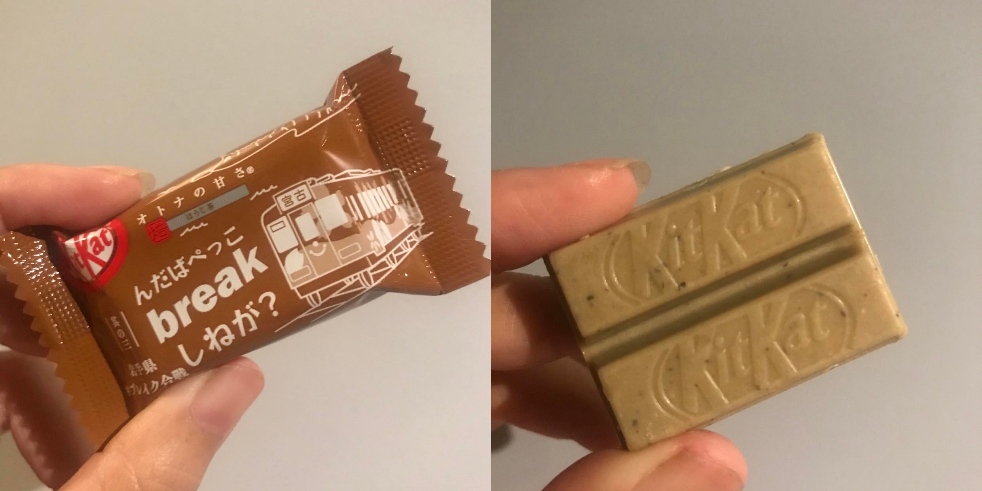 Houji Cha Aji (roasted green tea flavor), thus it’s not green :D. Still yummy, you can smell the tea but it has a subtle sweetness to it – the roasted flavour of green tea mixed with white chocolate makes it a good combination.

This one has been posted for long but I wasn’t sure so I had to ask help from a good friend (she’s in Japan) to help me understand. The package, she says, is a 2020 local Kitkat (from Iwate). んだばぺっこbreakしねが？means Why don’t we take a break? (Thanks, dear Clang). 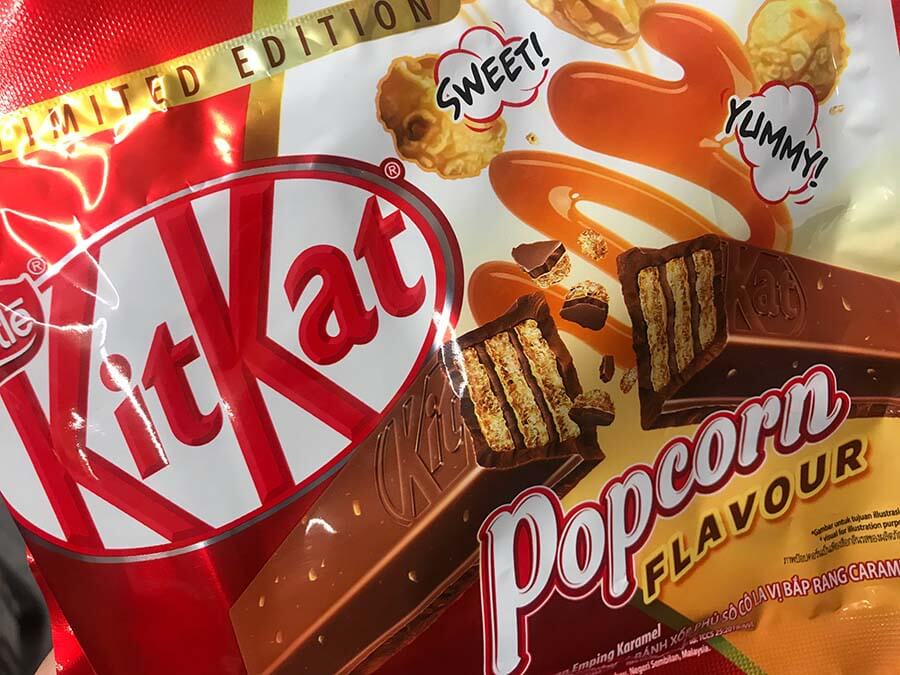 This Caramel Popcorn-flavored Kitkat is a limited edition release. As the official Kitkat description says: smooth milk chocolate bars that are dusted with crusty salted caramel flakes, encasing layers of freshly-baked crispy wafer with salted caramel popcorn praline. One bite and you will recognize each individual flavors of caramel, popcorn, wafers, and chocolate, the taste we love Kitkat for.

On August 2019, it was said that KitKat Japan will replace its plastic wrapping with recyclable origami paper. We’ve yet to see one with such packaging. 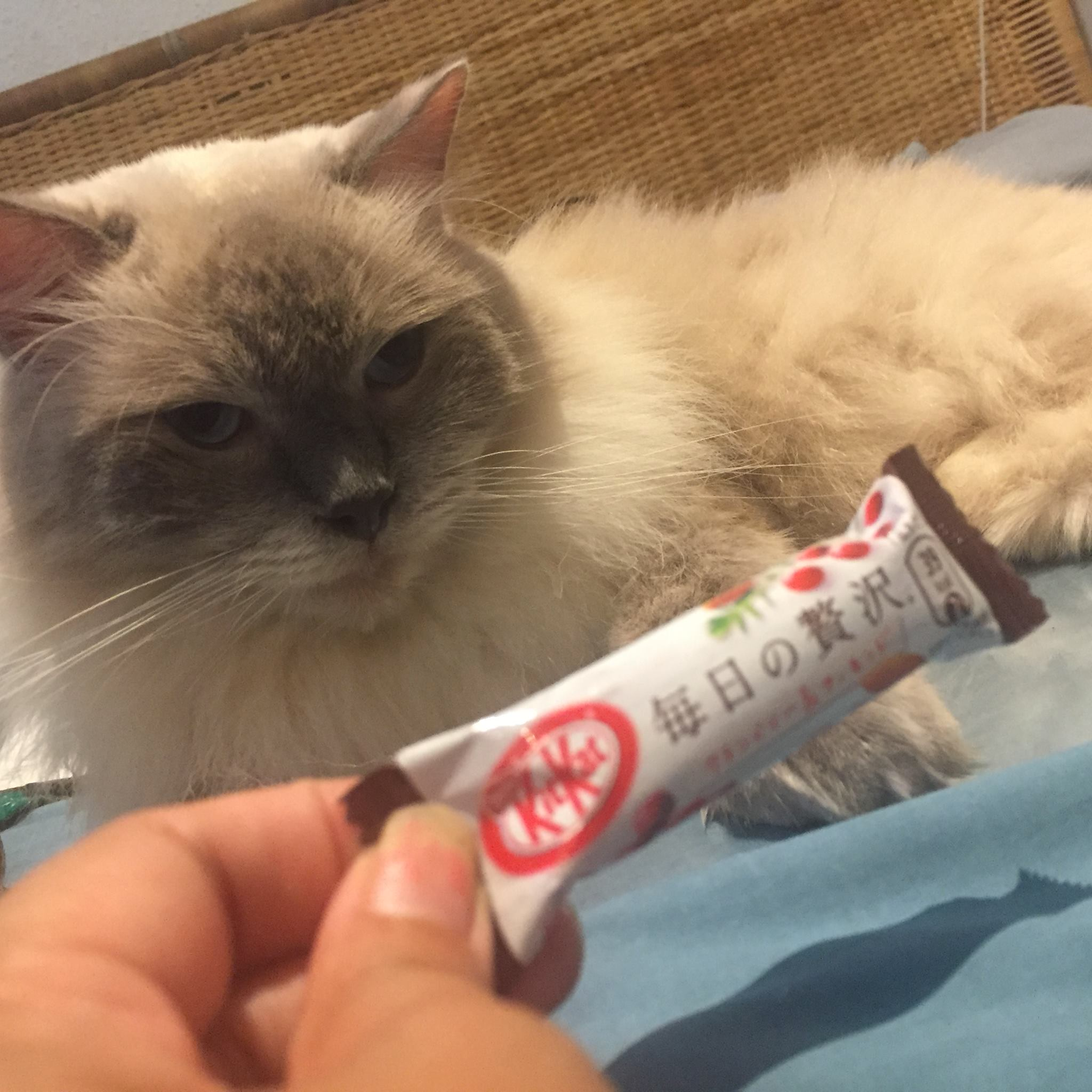 Kitkat Strawberry, one of dawty’s favourites, athough I think she likes all Kitkat flavours. She’s the one who often gets new ones lately as she has a Japanese friend who sends her some. (Arigatou ne!)

Like the Matcha versions, the strawberry flavours cater for adults and the other one for kids, it’s mostly the sweetness that differs.

These bars are pink but mostly white chocolate with strawberry flavour, not the Ruby cocoa – we like this better as we mentioned, the flavour is not so sour as the Ruby ones.

Kitkat (Sukima Jikan) Cranberry Almond in a single pack. I think these individually packed bars are better for us who loves to try every Kitkat flavor.

Sukima Jikan means “gap time” in Japanese, so it’s like gaps of time in between more important things – which can be the interpretation to Kitkat’s famous line: “Have a break, have a Kitkat.” 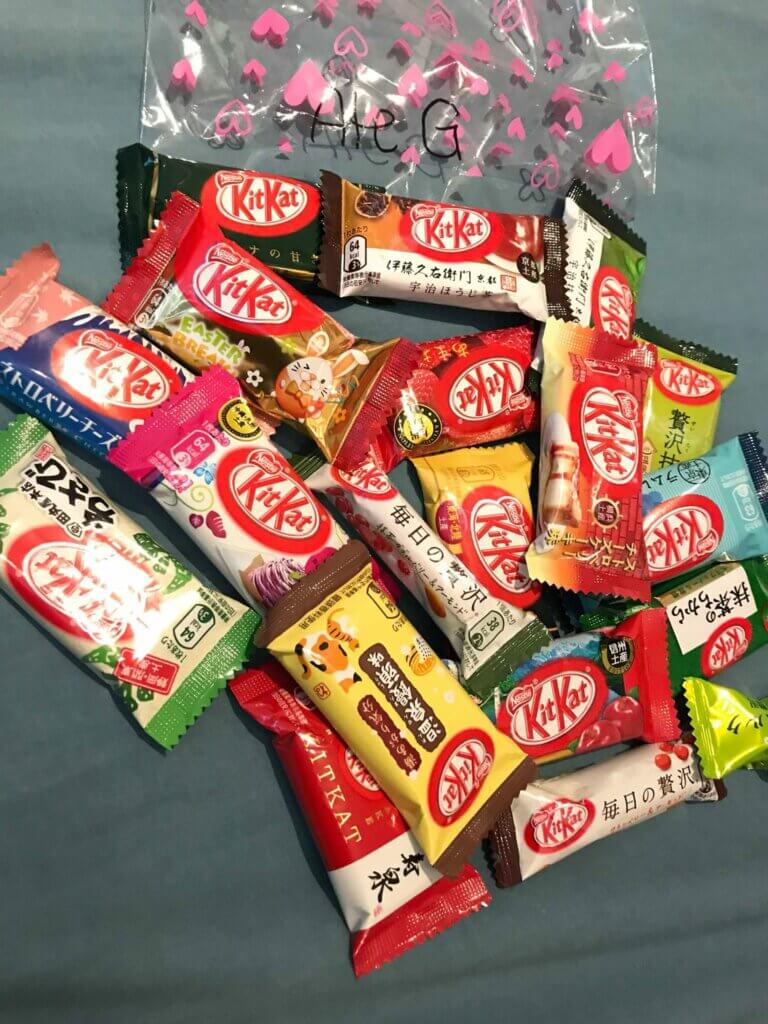 So my airliner friend came back from Japan again, I was supposed to go with her but circumstances didn’t allow me. So she made me feel better by bringing back all these. The bag contains a lot more than the last time, even got the Beniimo Purple Yum flavour 💜 which was from Okinawa ( we were supposed to explore Tokyo and Okinawa). 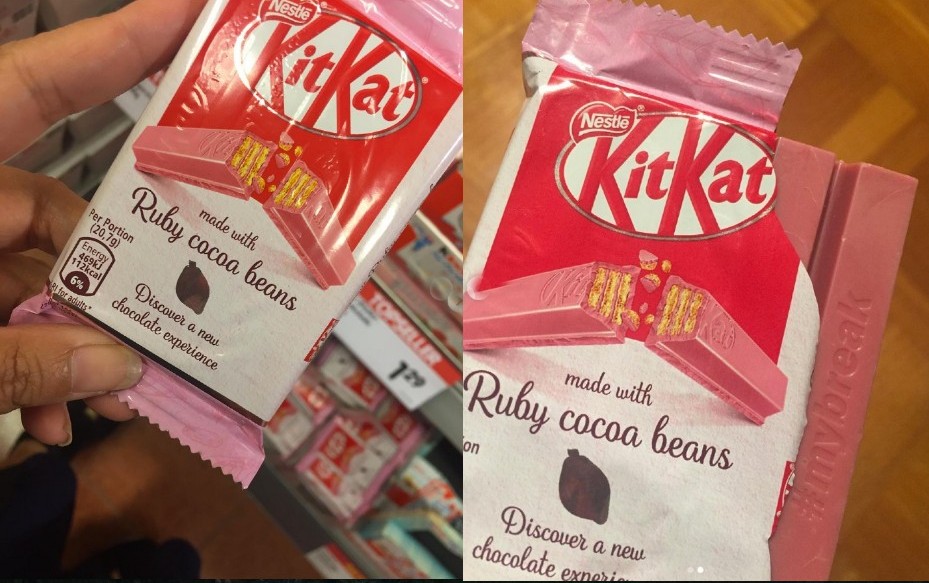 We tried this ruby cocoa beans Kitkat mom found at a nearby Interspar. It’s nothing really special, bit sour, which is what we don’t like about chocolates. Nothing in it for us to want to have it again unlike the other pink Kitkats we’ve had before. 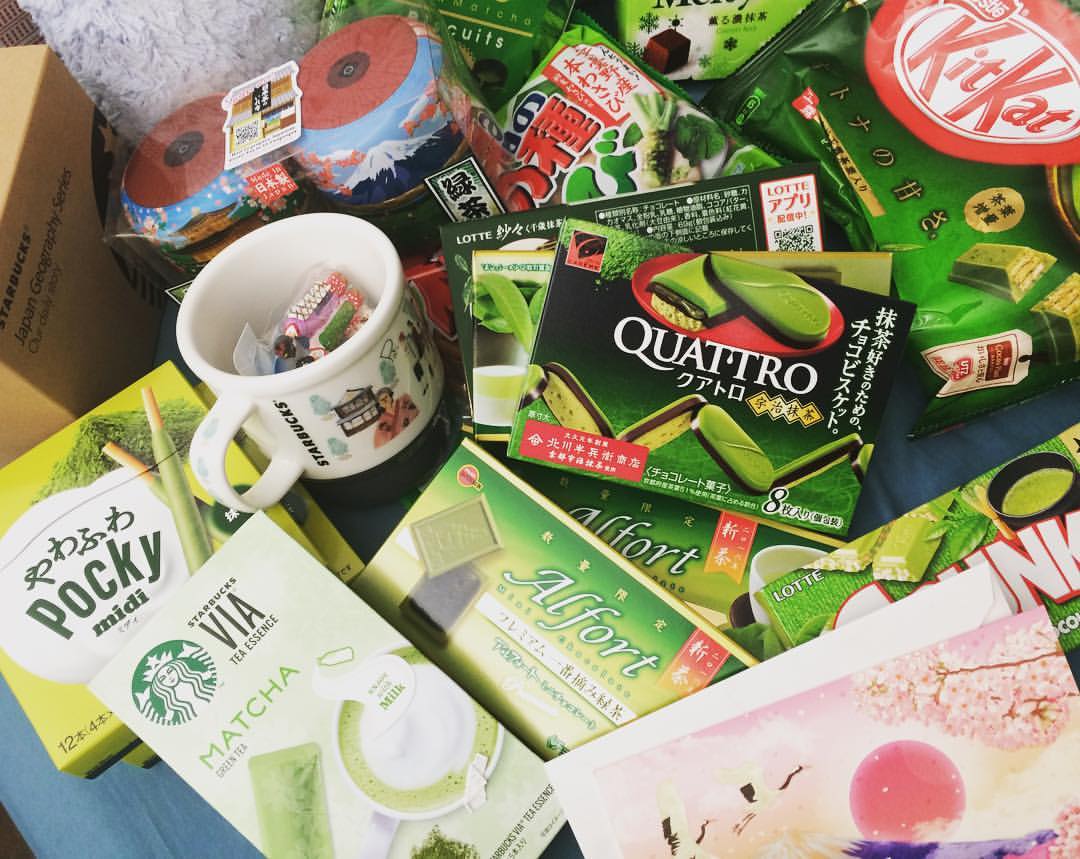 Mom’s architect friends who came by last year’s summer sent a boxful of yummy Japanese goodies we all love! Even comes with beautiful matcha cans imprinted with Mt.Fuji designs. We just love how green all of these are!

Here is another picture of us (all three) with them at the Stadtpark! 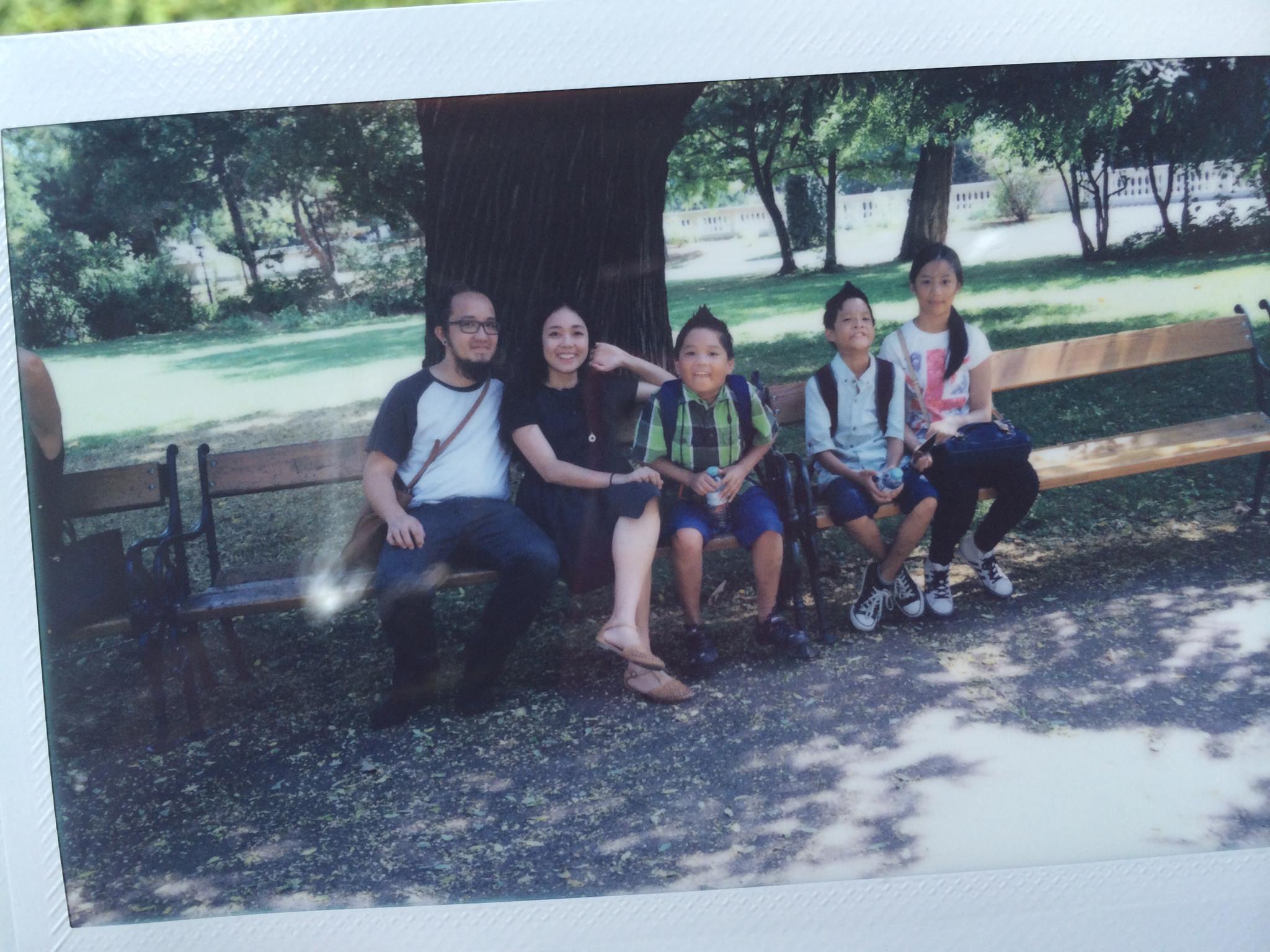 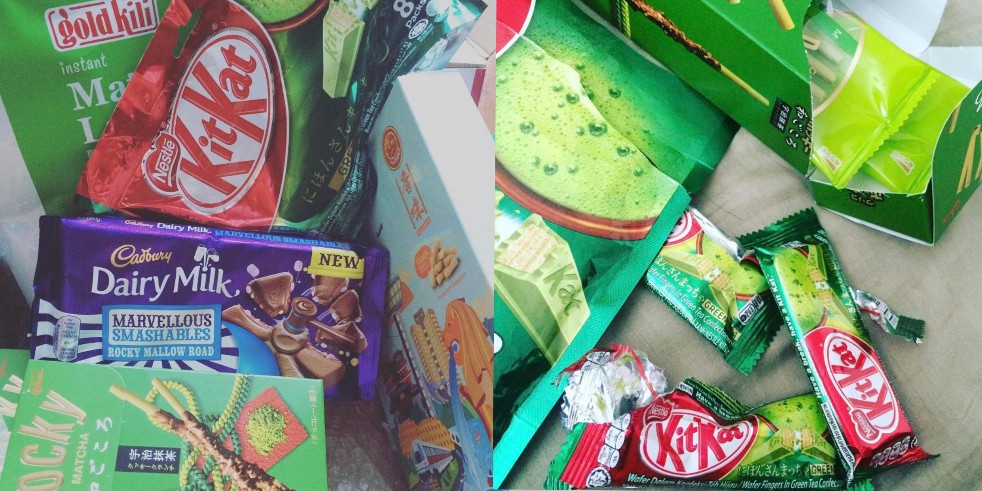 Friend from Singapore sent us a box of goodies again, woot! So we got Cadbury smashables, Matcha Pocky, Matcha drink, Matcha Kitkat, and Singapore shrimp rolls. 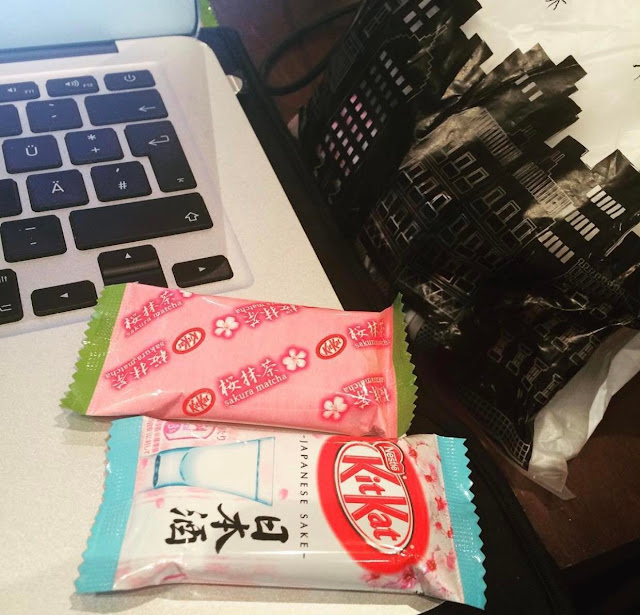 I have an airliner friend, and she recently came back from a trip to Japan, knowing that I love matcha, she brought me back some Kitkat with a fusion of flavors along with the usual matcha. For one, there’s sakura matcha – cherry blossom matcha which we often ask our favourite baristas at Starbucks to mix for us. That’s matcha frappe with white mocha and a side-dripping of strawberry syrup! ^_^

I wasn’t able to take a photo of all that she included in the bag (it was a lot) but there’s also Japanese sake (hehe – in the photo beside sakura matcha) among others. 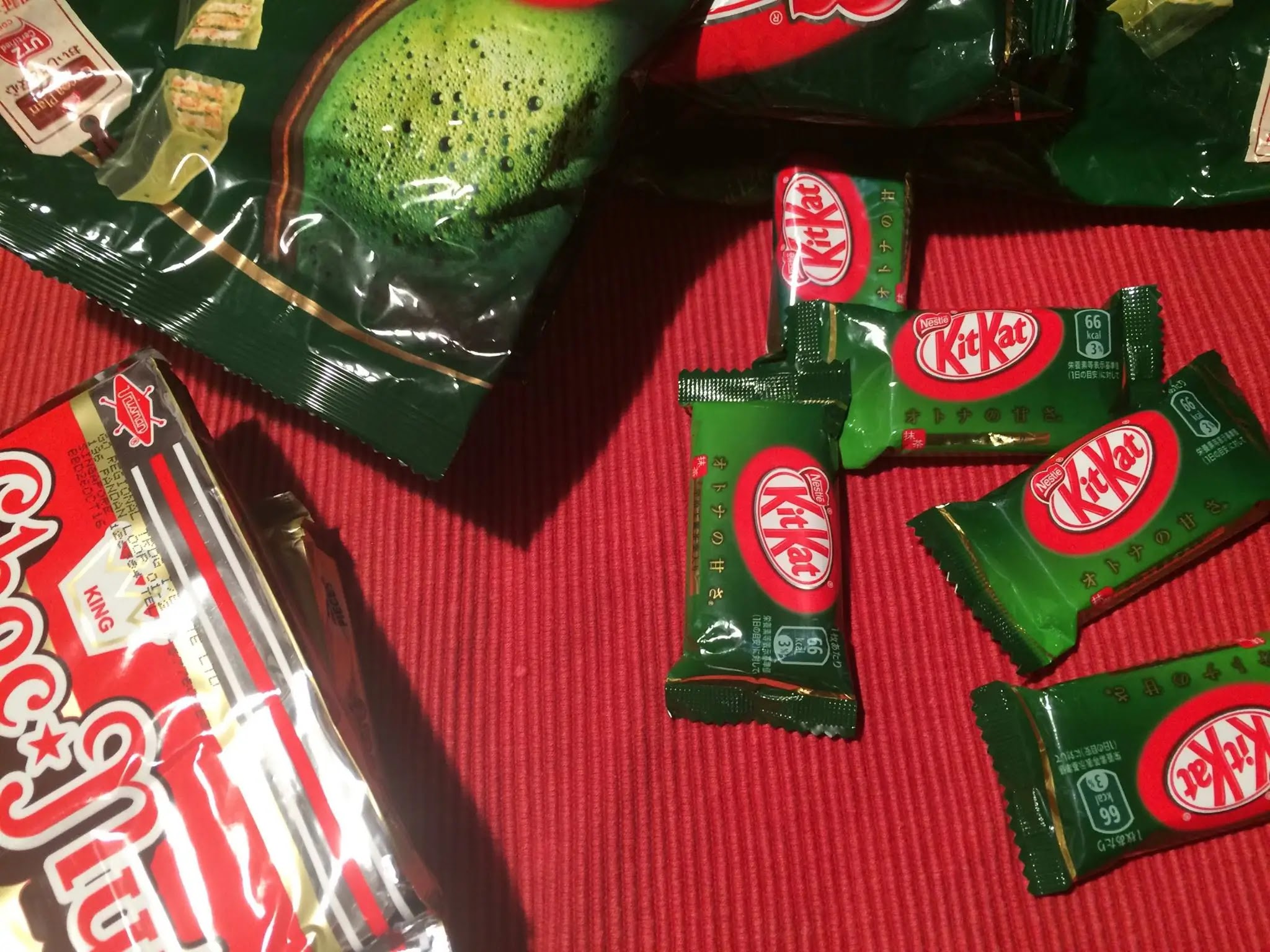 Friend from Singapore visited Vienna during their Eurotour! She gave me Kitkat matcha (for adult version) and also some Choc Nut, peanut butter goodies that’s also our favorite back home. 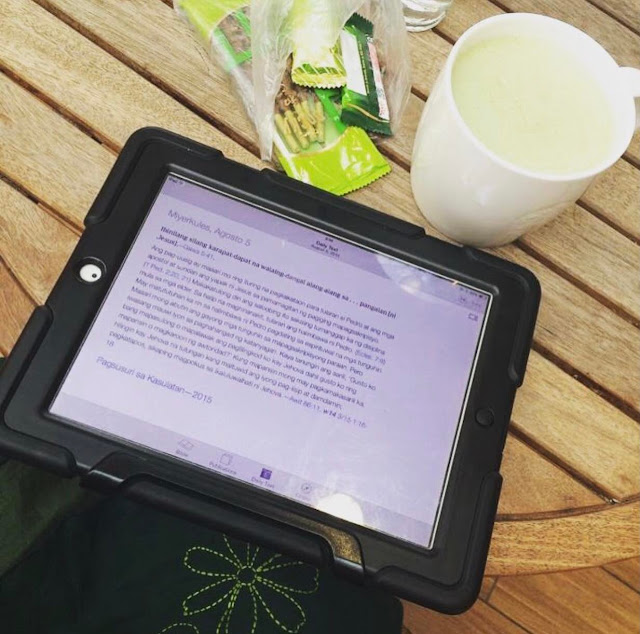 I got some matcha Kitkat, the bitter version, and matcha Pocky from a Chinese store near the Naschmarkt, took them with me to pair with matcha latte, finished them while waiting for a friend. Carbs, Burp* 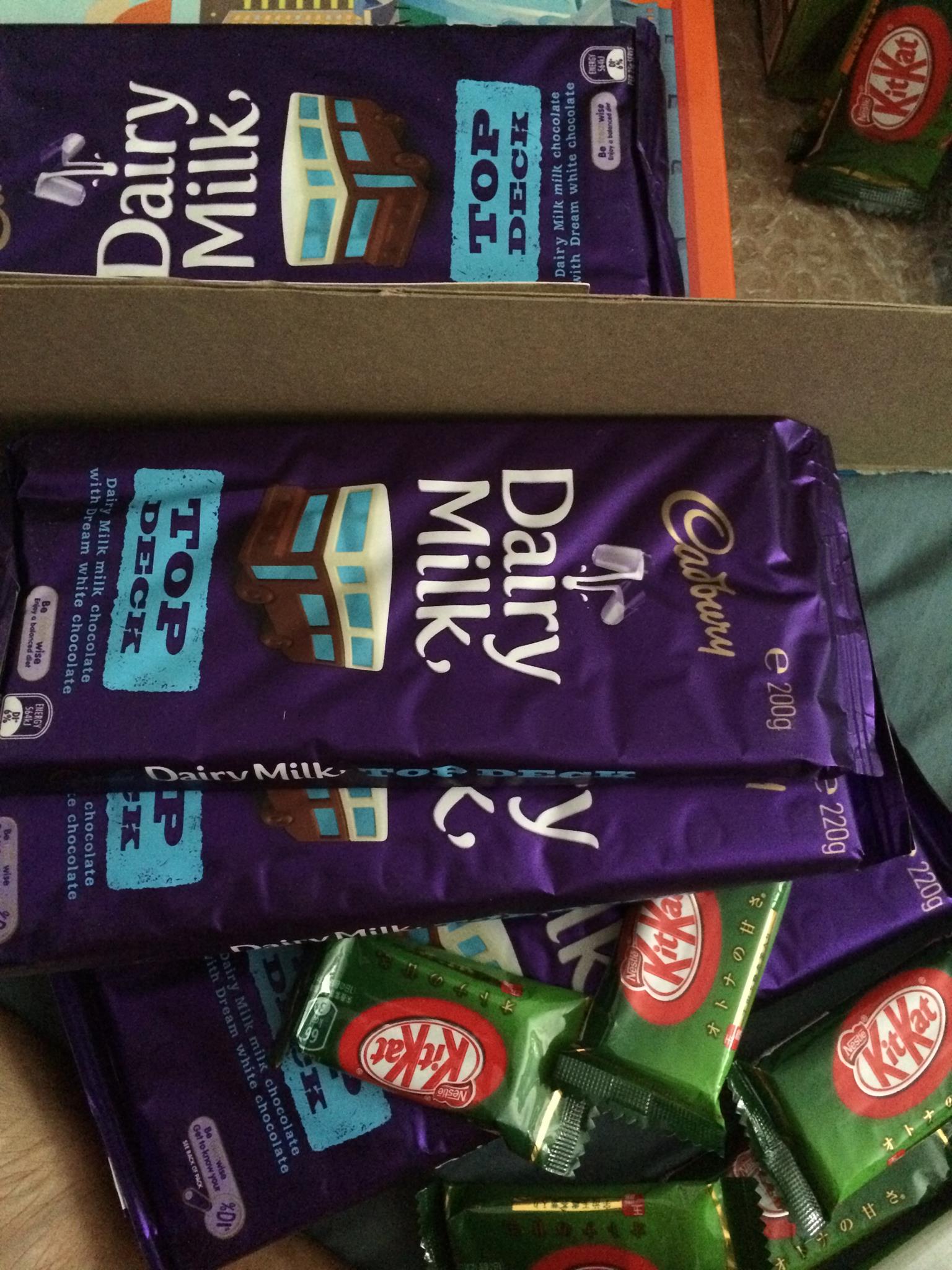 A dear friend based in Singapore sent me all the goodies I love – A lot of matcha-flavored treats and Cadbury (which she knows we can’t buy here). Although I’ve seen some stores carrying cadbury chocolates lately, it’s triple the price here compared to where she is. We’ve met in London some months back and she knows how I hoarded the Cadbury chocolates! 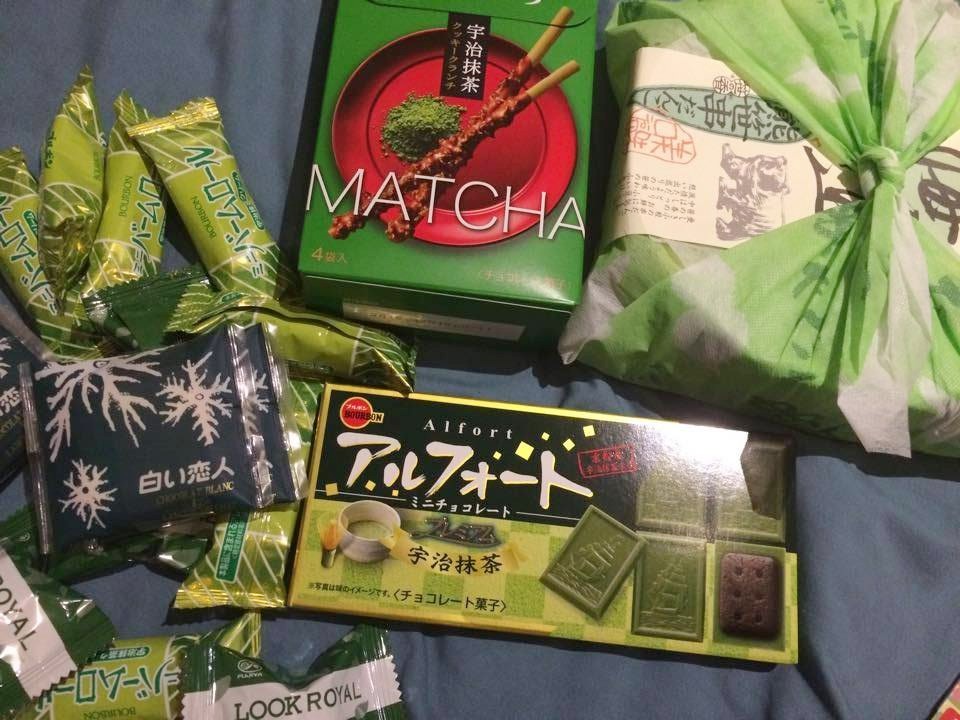 Architect friends came to explore Vienna, and hopefully also to visit us…lol. Knowing that I love matcha, they gave us a bunch of different matcha-flavored treats from Japan – their first stop before flying to Vienna. 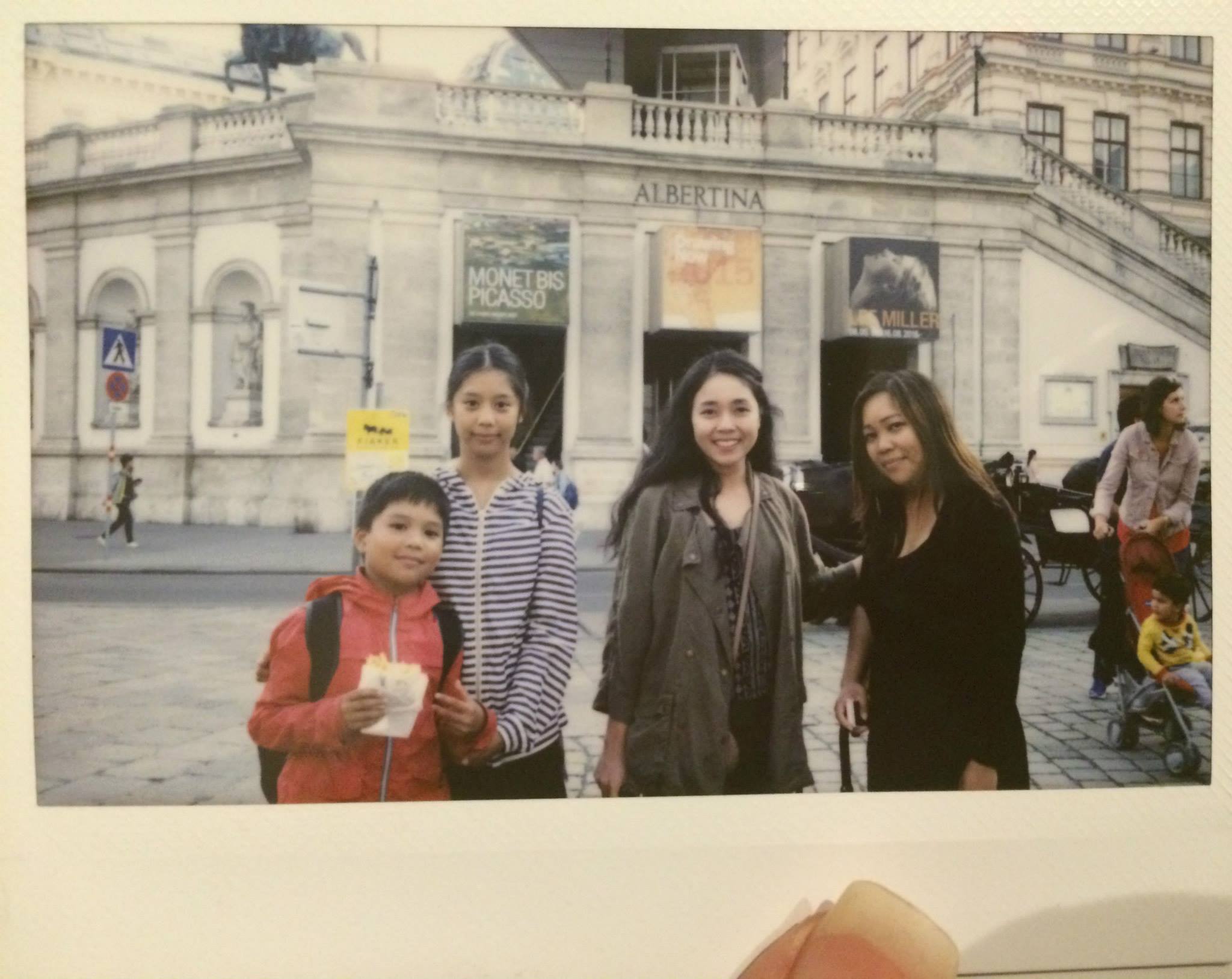 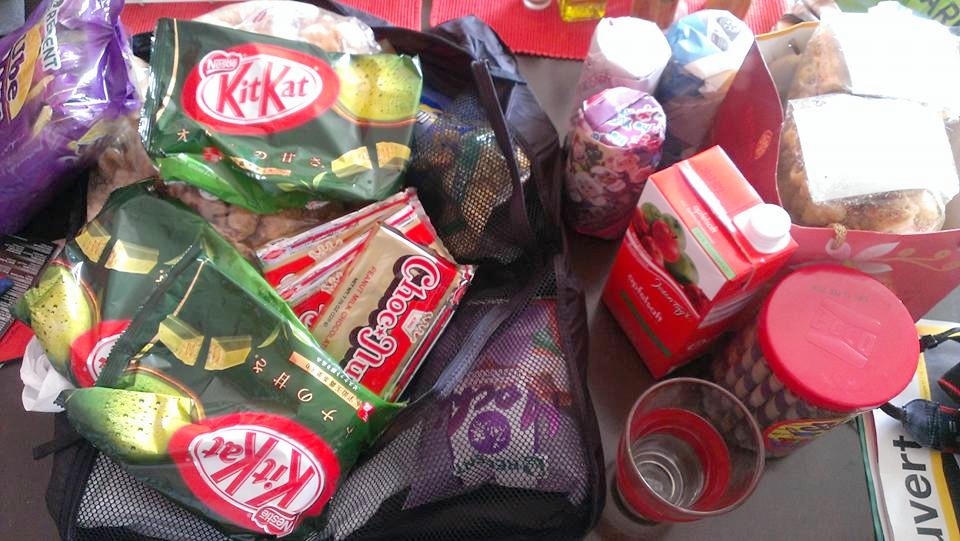 Goodies from Singapore and Philippines! We have two friends who often visit us, yearly – if their schedule allows. They always bring us  “pasalubongs” from both the Philippines and Singapore. Sometimes, the one from the Philippines would drop by Singapore so the one in Singapore would ask him to bring us goodies! Hehe ♡ ♥💕❤ 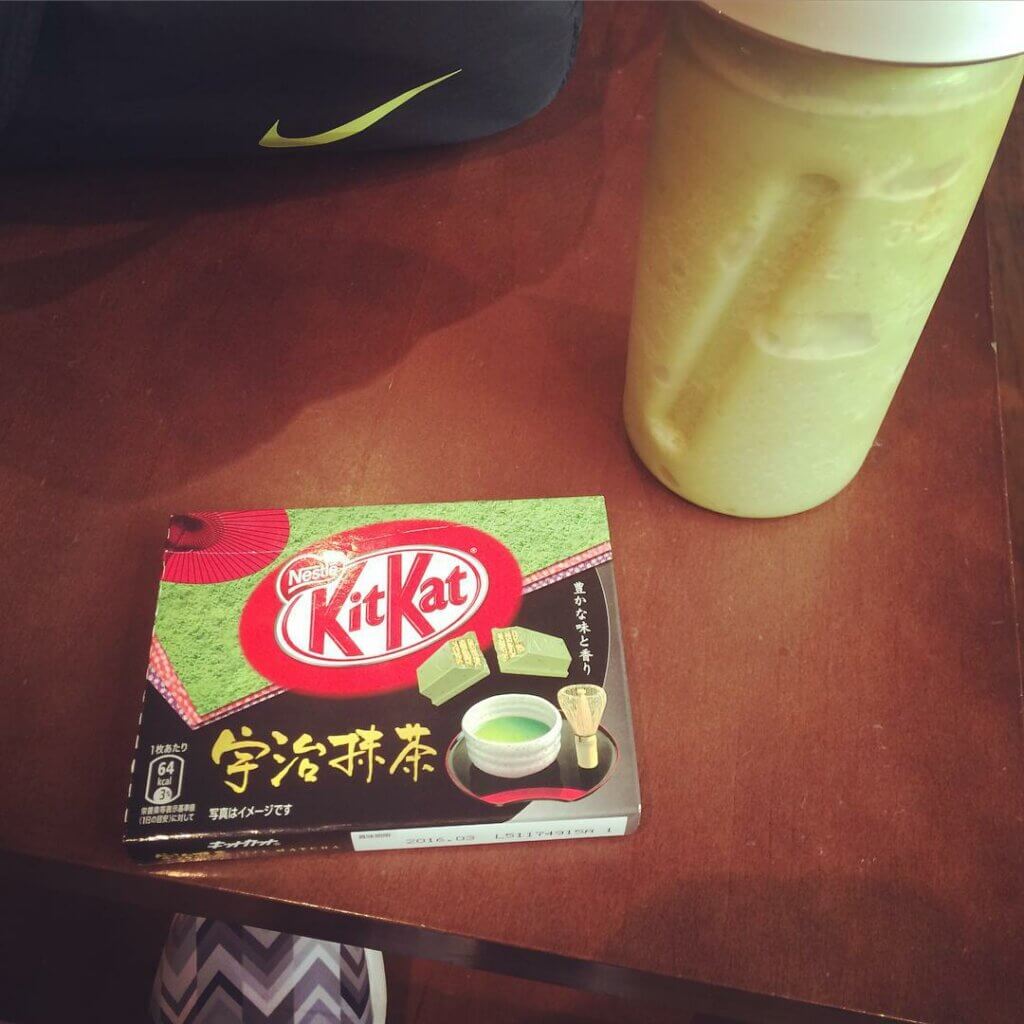 Knowing I love anything matcha, a friend gifted this uji matcha-flavored Kitkat before we went to play volleyball. Also had matcha frappe with it! 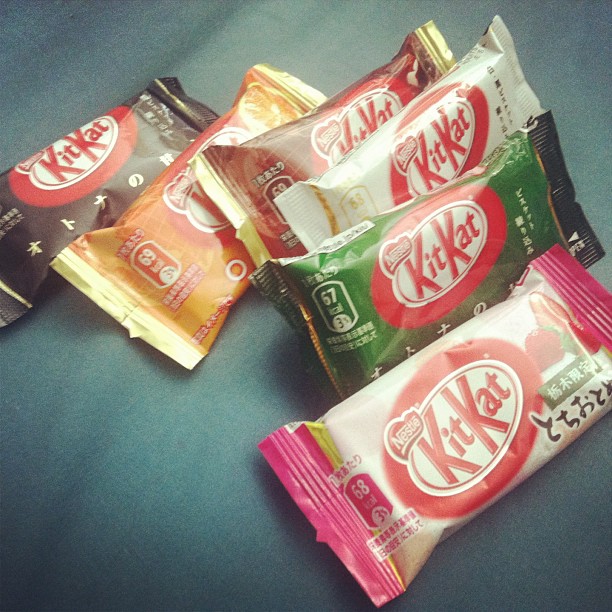 Chunky Kitkats were first introduced in 1999 and they would introduce different ones through the years. The Chunky Peanut Butter made a return this year (2012). 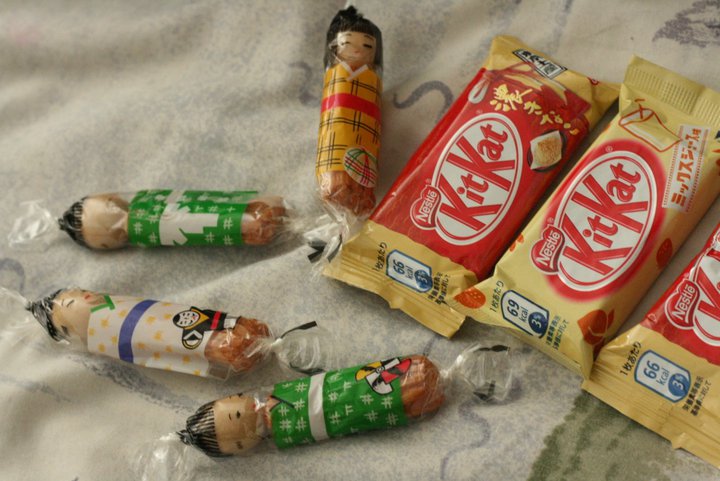 We got some Japanese goodies at the Aninite held near our place. It’s a sort of gathering of anime enthusiasts, and we had fun seeing everyone in costumes of our favorite Japanese movie and anime characters.

It’s here that we decided to document all Kitkats (and other treats) we’ve ever tried. 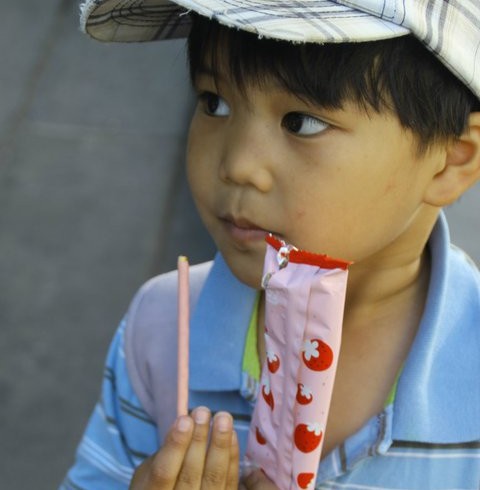 For the Love of Everything Japanese 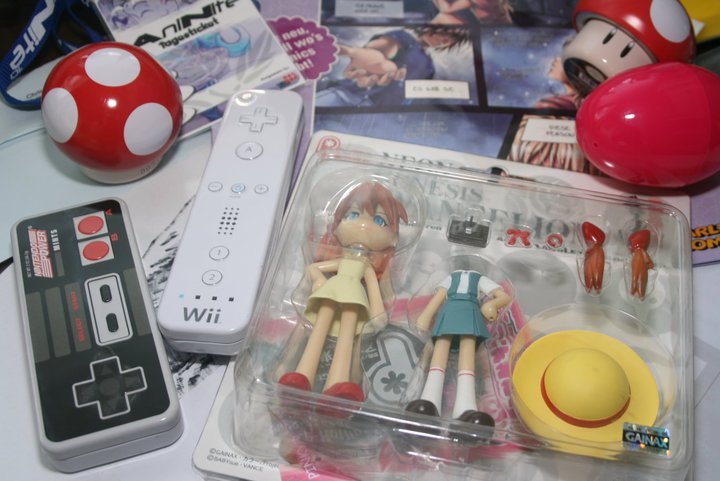