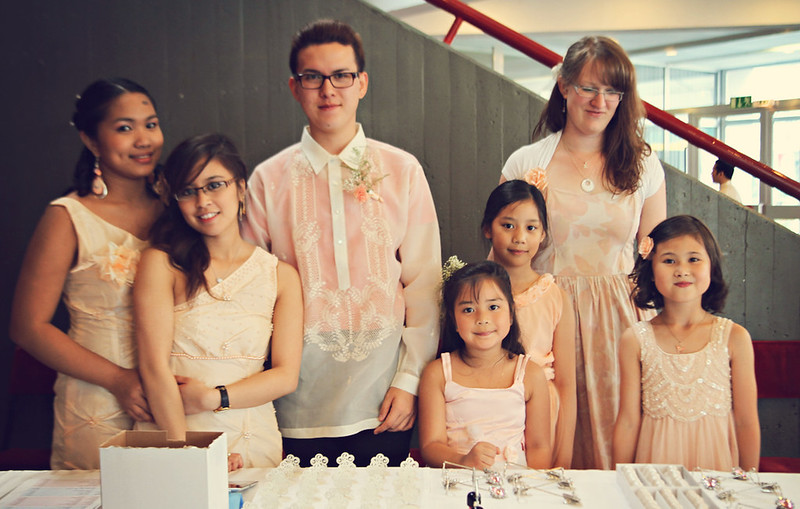 Becoming Wedding Ushers : with others from the entourage

You know how they say you’ll do anything for the kids? Turned dressmaker because I can’t find a peach dress for my daughter for a friend’s wedding. So I made a dress from  combined fabrics: organza, chiffon, and cotton. The overall result isn’t so “clean” but there’s always room for improvement.

I wasn’t able to fix her hair before the ceremony but I made a doughnut bun before the reception started. Hubby and I were tasked to take the photos so it was a little hectic, to say the least.

The boys only needed a peach undershirt worn with their Barong, an embroidered long-sleeved formal shirt for men and a national dress of the Philippines. But because the boys decided to help their dad with the photo booth accessories – telling guests how to use them and how to pose, I wasn’t able to take proper pictures of them wearing Barongs.

The below photo of my daughter was before the wedding. The dress, per se, is made up of two pieces, the rosettes were to hide the skirt’s elastic. It was fun and a little frustrating finishing this piece, but I guess it was all worth it anyway.

This isn’t the first time that the kids went to usher, be a flower girl and such in a wedding. They did too during my brother’s wedding and although it was a different setting, they did well on their parts.

Weddings are pretty but it could also spell disaster if you don’t prepare well, here are some things to do and prepare the kids for to make everything smooth for the day. 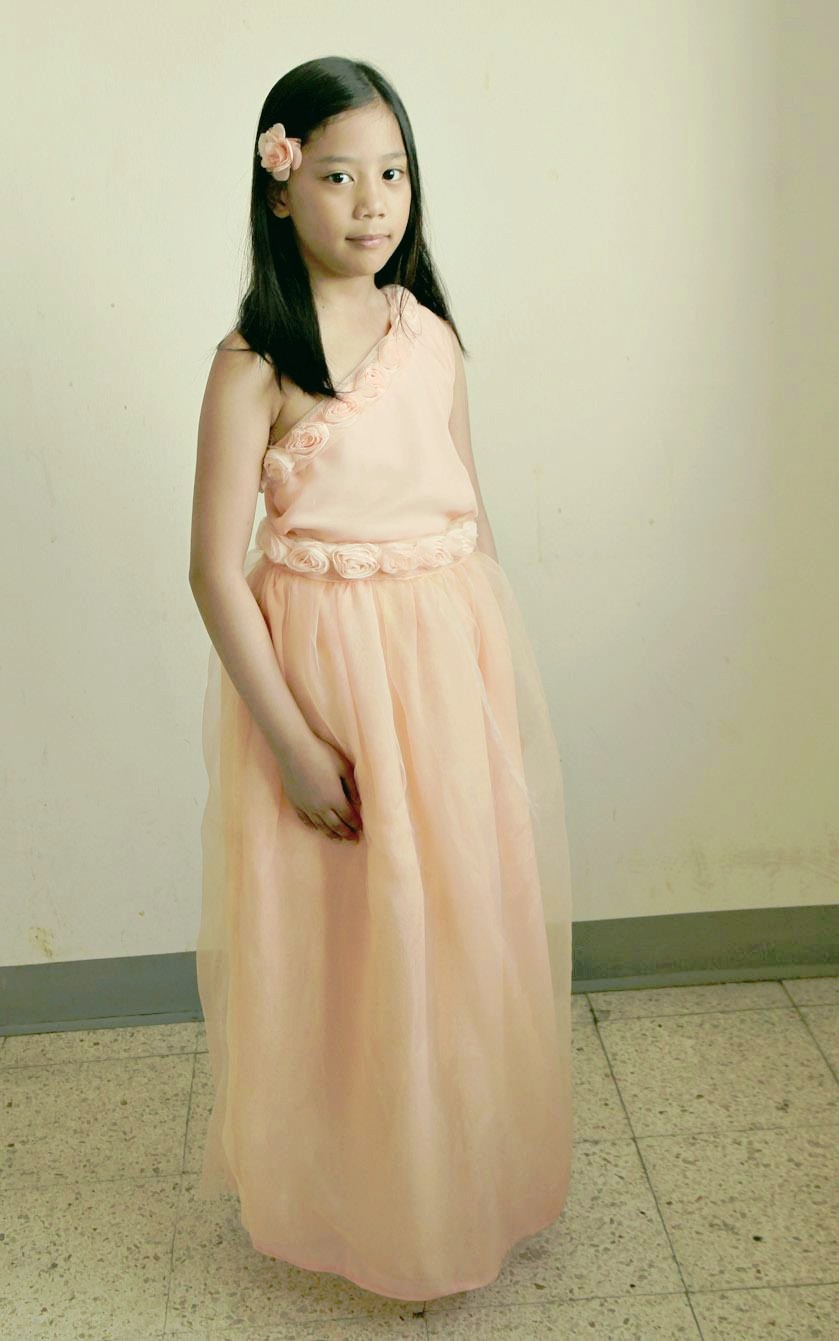 Roles of Kids in Weddings

In big families, including the kids in the entourage would mean having many roles. While there could be one of each, there is no hard rule to how many should fit the shoes of these roles.

If old enough, kids can usher guests onto their seats per plan.

They usually carry the bride’s train, especially if the bride’s wedding dress has a long train.

He is a special page boy who carries the wedding rings for the bridal party.

She holds the bride’s bouquet at times needed during the ceremony. 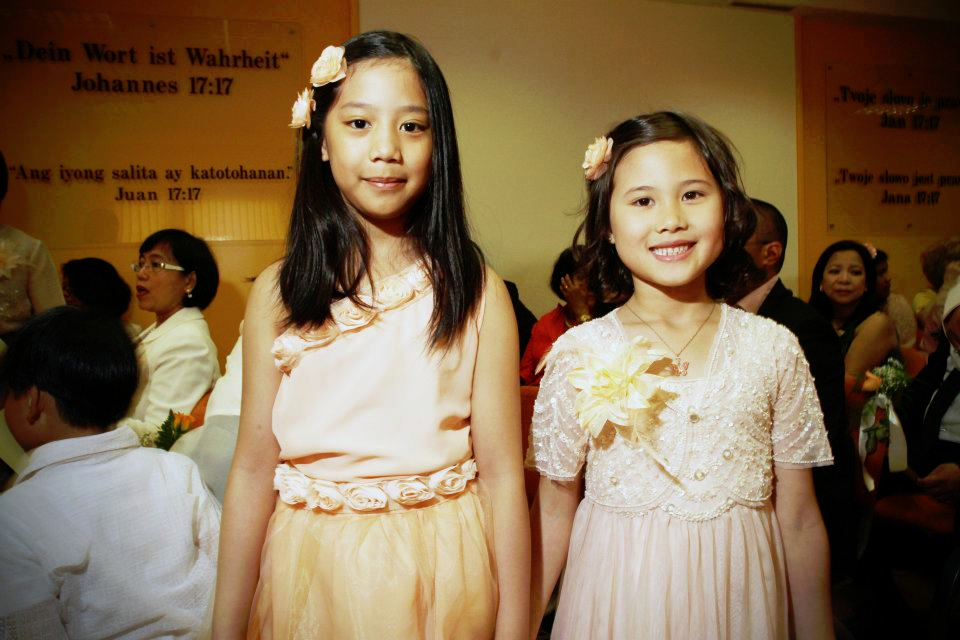 Kids will understand what you tell them, but they might not heed everything – because: kids. Nevertheless, explain to them what the wedding would be about, how it would go, where it would be held, and why they should behave.  When practices for walking down the aisle is scheduled, bring them. They would see others from the entourage doing what they should and they would somehow follow. 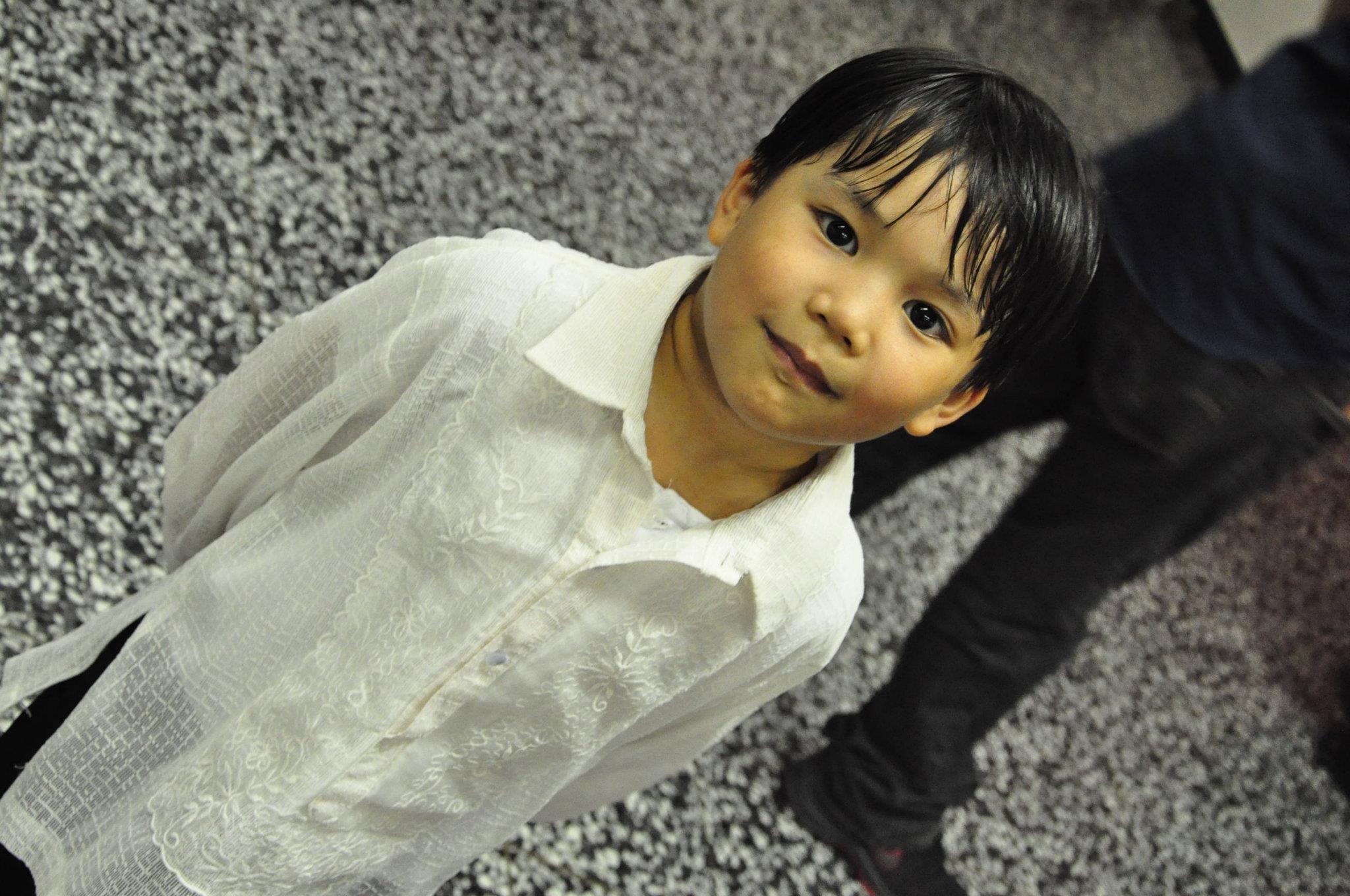 Even though you’ve practiced, and talked with the kids, they might still go differently and do their own thing. They might walk halfway down the corridor then decide to just quit. 😀 Well, kids. Talk to older members of the entourage they are comfortable with, and also with the wedding organizer, the bride and groom about arranging it with others in reminding the kids and applauding them for being orderly.

Still, there will be cute moments and funny ones that guests would find adorable, so just let things be. It will be a fun story to tell years later.

For the little girl, do not make her wear a lot of accessories, an earring would do, and probably a hair pin that will compliment the dress. I could only make her wear flowery ones, no fancy, shiny pieces. These might get lost along the busy day. 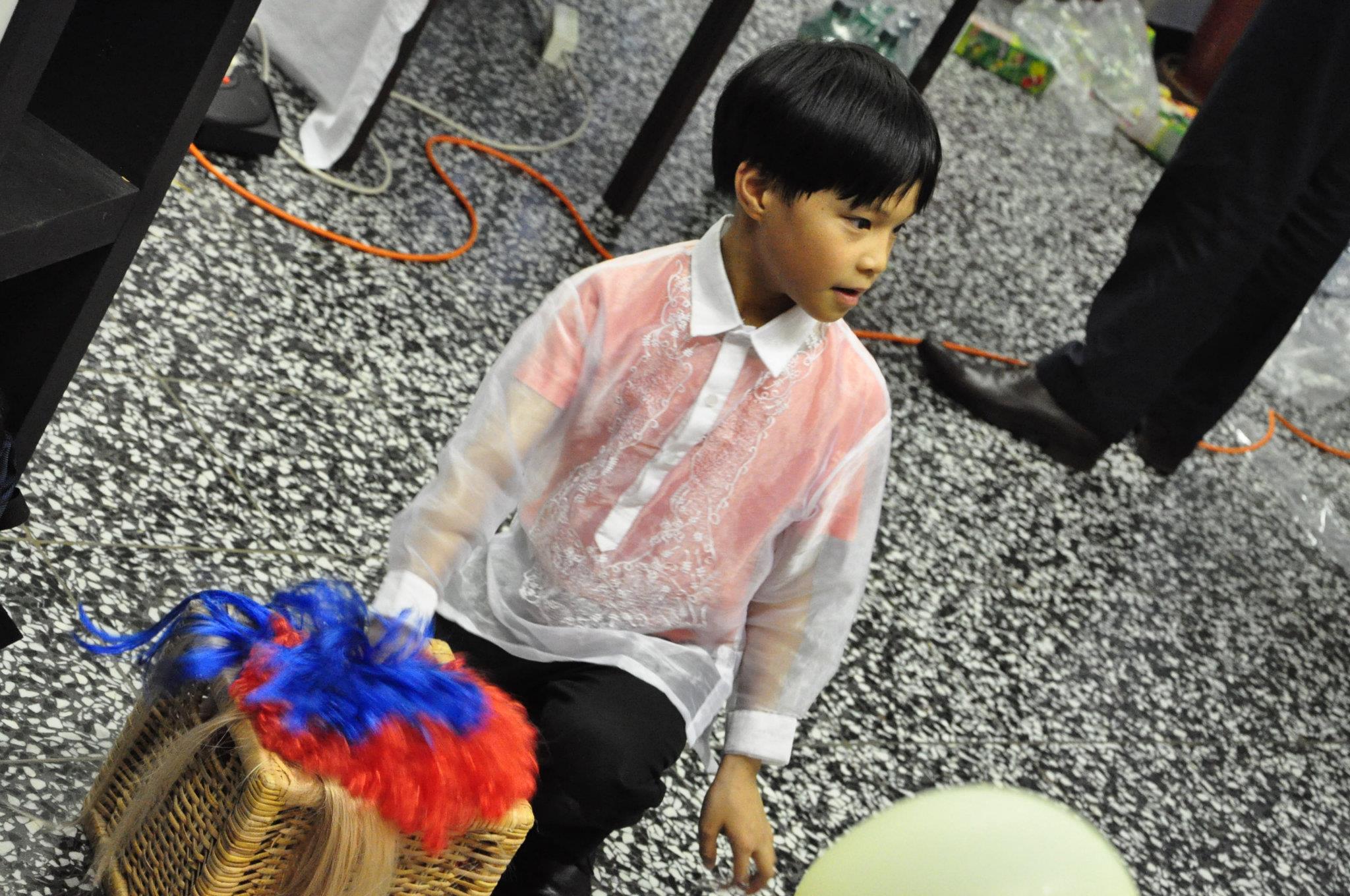 Like in many other events, there would be delays with programmes, food serving, among other things. To avoid tantrums it is best to do the following:

Bring a change of clothes: shirts or comfy polos with colors close to the motif. This will allow them to move around and enjoy too without ruining the formal clothes. Also bring comfy shoes to change in – formal shoes tend to be stiff at some point.

Bring snacks and water: you’ve seen how bridesmaids suddenly fall from standing too much? Sometimes it’s just because of standing straight and tall while locking their legs to do so – it could also be stress, hunger, and maybe tight clothing. Just to be safe, bring something to keep hunger and thirst at bay.

Bring something they would be busy about: the reception wedding programme would be boring for kids. Sure there would be other kids, but there might not be room to play, so bring stuff they enjoy: a rubik’s cube, colors and coloring books – to keep boredom at bay.

It is never too much to ask them if they are hungry or tired. See to it that they are full and enjoying the after party. 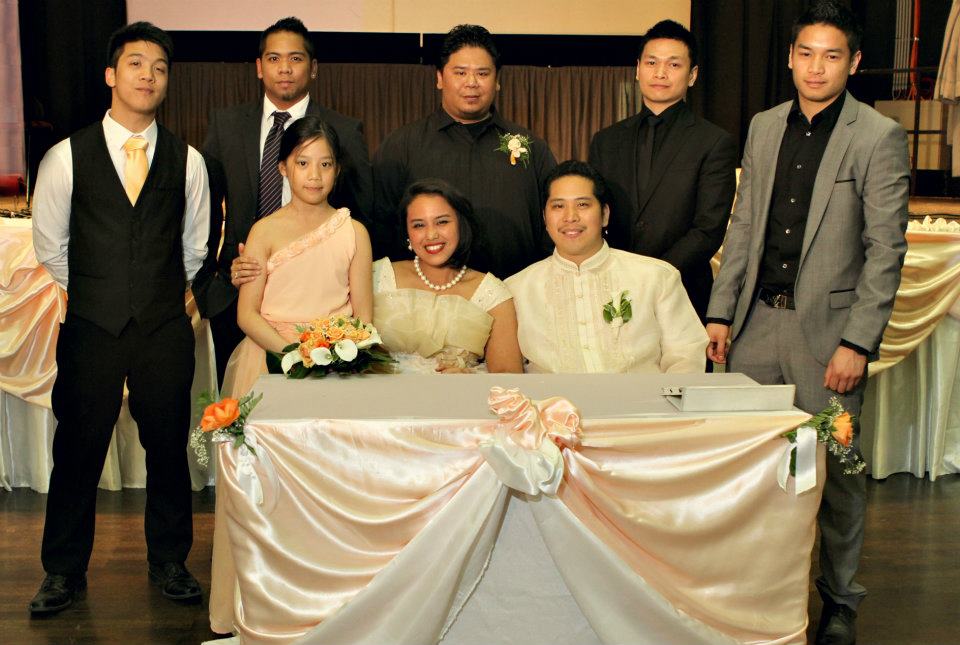 This photo was supposed to be the bride and groom with everyone on table number 2. That would be our whole family and the groom’s cousins and brothers. As mentioned above, hubby was at the photo booth and the boys were marketing out the props, while I was taking the pictures, so only the little girl was left available to be in this souvenir photo.

Weddings are full of fun and love, but also unpredictability. With proper preparation, one can minimize untoward incidents for themselves, for the kids, for the entourage, and the bride and groom too. Talking to the kids and explaining to them the whys and such of weddings repeatedly will make them understand why they should behave during the ceremony. Expect delays to happen and prepare stuff to make the kids comfortable and in their best suit! Keep them full and entertained. ^_^

Always see the best in every situation. If you can’t find a dress or suit for your child, you can try a DIY. 😉  Also, ring bearer running away from the aisle is going to be a fun story when that kid grows up. 😉

Previous Post Heads Up for A Nanny Cam in the House
Next Post Will Not Wearing Glasses Worsen Eyesight?